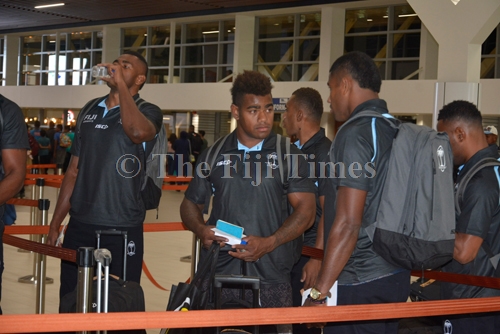 As they play rugby in Europe they are expected to put some professionalism into the side.

While no one is guaranteed a position in the final 12-member squad, their inclusion has been a morale booster.

“It is fantastic as they are back into the system,” national coach Gareth Baber said.

“They are top professionals and they know what is required from them at this level. They are good mates. “I had been communicating with them last year as we were travelling the world. They are aware of what the expectations are and know that they have to prove themselves in the nine to ten days and put their hands up for selection.”

Baber said the preparations for the Rugby Sevens World Cup would be different as they would not be entering the event on the back end of a tournament.

“We have looked at each tournament that we have played this season and we have struck pretty much to a plan when got to that. It is very different to this one. “Obviously we have to look at the combinations of the players coming in and you have to monitor that. “You don’t want to put anyone at risk of injury. But you have to push the boys to that level and remind them exactly what it is to play at the top 7s level and get them ready in the right mental process going into the tournament. “We won five tournaments in the 2017-2018 HSBC World RugbySevens Series playing some good rugby that we wanted to play. “We took up the oppositions positively going forward being aggressive in defence and won games but we did not do it as consistently as we wanted to. “A couple of these players have the knowledge of how to win top tournaments so it will be a good learning for all of us.”

Baber has urged the fans to keep supporting the team “We know that we have a good squad together,” he said.

“We have the support of the Fiji Rugby Union to go to Utah which is a huge bonus for us as we want to acclimatise by getting into the country early,” the former Hong Kong 7s coach said.