Tomic fined for playing below standards at Wimbledon 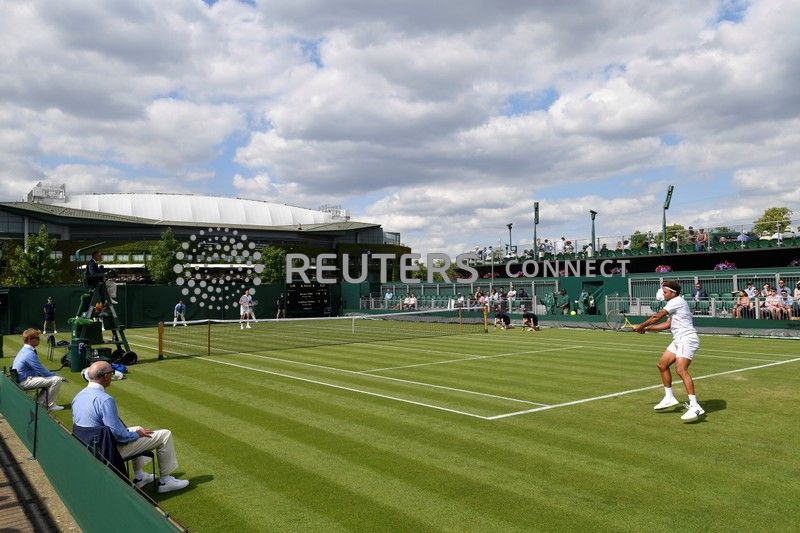 LONDON (Reuters) – Australia’s Bernard Tomic was fined 45,000 pounds ($57,000) for not playing to “required professional standards” after he put in minimal effort during a 58-minute, first-round thrashing by Jo-Wilfried Tsonga at Wimbledon, organisers said on Thursday.

“It is the opinion of the referee that the performance of Bernard Tomic in his first round match against Jo-Wilfried Tsonga did not meet the required professional standards, and therefore he has been fined the maximum amount of 45,000 pounds which will be deducted from prize money,” organisers said in a statement.

With first-round losers at Wimbledon receiving 45,000 pounds, Tomic exited the tournament empty-handed following his latest run-in with the All England Club’s authorities.

The Australian was fined $15,000 in 2017 after admitting faking an injury during a first-round loss to Mischa Zverev, saying later he was “bored” with Wimbledon.

When asked to sum up his performance on Tuesday, Tomic said: “I played pretty bad.” Asked to elaborate, he said: “I just played terrible.”

He found a surprising ally, however, in Tsonga, who said after his second-round win over Ricardas Berankis on Thursday that he sympathised with the Australian.

“That’s touchy. Because you never — they will do that with him and not with others? And I think it’s a little bit too much,” Tsonga told reporters.

“In the third set he played and it was tight. And I played well to win this set. So I don’t know.”

American Sloane Stephens expressed her surprise too, saying she was not “100 percent” on board with tournaments deciding on a player’s effort levels, calling it a “slippery slope”.

“When you start doing that and being the judge of what happens and how people earn a living, that’s when it gets a little tricky,” she said.

It is not the first time Tomic has been in trouble for not trying.

He was nicknamed “Tomic the Tank Engine” after accusations he “tanked” — or failed to try his best — in a loss to Andy Roddick at the 2012 U.S. Open.

The Australian also broke the record for the quickest loss at a Masters-level tournament on the ATP Tour after being crushed 6-0 6-1 in 28 minutes by Finn Jarkko Nieminen in Miami in 2014.

Tomic faced match point holding his racket backwards in a defeat by Fabio Fognini at the 2016 Madrid Open.

Tomic, trailing 0-40 as Italian Fognini tried to serve out the match at 6-2 5-4, held his racket by the head with the handle pointing forwards and barely moved as his opponent fired an ace past him to seal victory.

Tomic, who was once hailed as being among the game’s brightest emerging talents, has now lost in the first round of his last three Grand Slams, exiting the French Open in May with a straight-sets defeat in a match lasting 82 minutes.