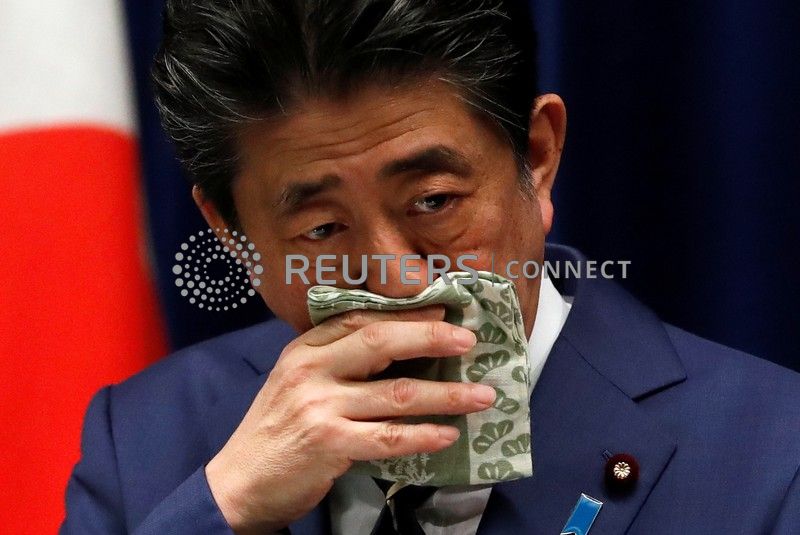 Japan's Prime Minister Shinzo Abe wipes his nose as he holds a news conference on Japan's response to the coronavirus disease (COVID-19) outbreak, at his official residence in Tokyo, Japan, March 28, 2020. REUTERS/Issei Kato

TOKYO (Reuters) – Japan’s capital recorded more than 70 new coronavirus infections on Tuesday for its highest tally in a single day, as pressure mounted on the prime minister to order a lockdown.

Japanese cases topped 2,000, and public broadcaster NHK said 78 cases in Tokyo took its tally of infections past 500. Media reports said 7 people in the city had died, five at one hospital.

“This is the greatest increase up to now and is certainly of high concern, and I’m worried about what tomorrow’s figures might show,” Tokyo Governor Yuriko Koike said.

A government spokesman said Prime Minister Shinzo Abe told cabinet members he and his second-in-command, Taro Aso, would no longer attend the same meetings to protect the leadership from infection. But the two were later shown at the same gathering – although wearing masks and sitting apart.

Last week, British Prime Minister Boris Johnson was obliged to switch to running the country from isolation after testing positive for the virus.

Economy Minister Yasutoshi Nishimura said Japan was not yet in a situation that required a state of emergency, triggering a potential lockdown, although the situation was precarious.

“We’re just barely holding it together,” Nishimura told reporters. “If we loosen our grip even a little, it wouldn’t be surprising to see a sudden surge.”

Infections have now exceeded 770,000 worldwide, with more than 37,000 deaths, as confirmed cases in the United States, Italy and Spain overtake mainland China, where the virus originated late last year.

In Tokyo, there has been intense speculation that a lockdown could come soon, fuelled by the rising number of cases.

The national total edged past 2,000 infections after a centre for disabled people in Chiba prefecture, east of Tokyo, found seven more infections. There have been 66 deaths.

With limited testing in Japan, there are questions about how widely the virus has spread.

About 7.1% of nearly 64,000 respondents said they had at least one virus symptom, such as high fever or a bad cough, between Friday and Monday, according to a survey of users in Tokyo and neighbouring prefectures run by the chat app Line and the health ministry.

Such symptoms do not by themselves prove infection. But the 4,500 people who reported symptoms in the survey was markedly higher than Tokyo’s official figure of 443 infections by Monday.

Only last Tuesday, with a lockdown already in the offing, Japan and Olympic authorities gave in to pressure from athletes and sporting bodies worldwide to delay Tokyo’s 2020 Summer Games for a year.

Some businesses in the capital are moving to curtail operations even ahead of a lockdown. On Tuesday, department store operator Isetan Mitsukoshi Holdings Ltd said it would close six stores in Tokyo on weekends through April 12.

Koshidaka Holdings, an operator of karaoke and hot spring outlets, said it would close 200 karaoke outlets until April 13.

But any lockdown in Japan would look different from mandatory measures in some parts of Europe and the United States. Laws limit local authorities to requesting people to stay at home.

Tokyo Governor Koike has asked residents to avoid unnecessary outings, while her counterpart in the second biggest city of Osaka felt the government should declare a state of emergency, media said.

The government said it would seek data from wireless carriers, such as statistics on people’s movements, to help gauge the effectiveness of a voluntary request.

A director of Japan’s top organisation of doctors urged that an emergency be declared before it was too late.

Development of medicines and vaccines would be crucial to contain the virus, Abe told Tedros Adhanom Ghebreyesus, director general of the World Health Organization, in a telephone call on Monday.

Japan intends to promote clinical research on an anti-flu medicine called Favipiravir with other countries as a treatment, Abe said.

The drug, also known as Avigan, was developed by Fujifilm Holdings Corp, shares of which closed up 2.2%, after having risen as much as 6.6% in Tokyo. The company later said in a statement it was starting a Phase III clinical trial in Japan of the drug for the coronavirus.