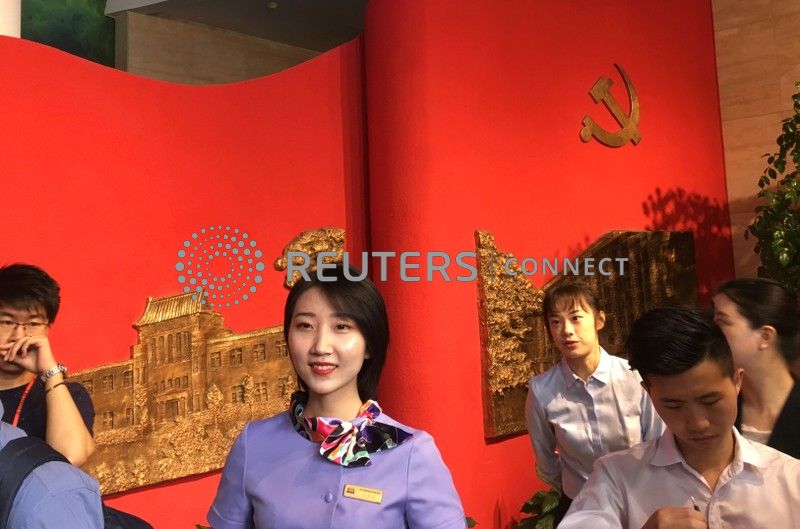 BEIJING (Reuters) – Images of squat toilets flash on to the screen as around 80 men and a smattering of women listen intently to their teacher tell them of the importance of following President Xi Jinping’s instructions on bringing a toilet revolution to China.

“Northern China lacks water, so you need toilets that don’t flush,” the teacher tells them, describing how dry squat toilets are a good idea for China’s more arid parts, and reminding them of Xi’s push for cleaner public lavatories in the world’s most populous country.

But these are no ordinary students and this is no ordinary school – it’s the Central Party School in a leafy Beijing suburb that trains the rising stars of China’s ruling Communist Party, opened briefly for a rare visit by a group of foreign reporters.

Tracing its history back to 1933 and the early days of the Communist revolution, the school takes in the top tier of party officials who are destined for greater things, teaching them leadership, decision making, party history – and how best to implement Xi’s instructions.

It’s not all fun and games, even though the well-equipped campus, sitting next to the old imperial residence the Summer Palace, feels more like a five-star resort, complete with an indoor swimming pool and koi-filled lakes.

Statues of the founder of modern China, Mao Zedong, and the architect of its economic reforms, Deng Xiaoping, dot the campus. The hostel rooms are sparse but comfortable, stocked with books on Xi’s thought, military theory and even religion.

Wang Gang, one of the Party School’s teachers, said certain things were not up for discussion, including offering dissenting views about major party decisions, in line with broader instructions to the party membership that have come as Xi has tightened his grip.

Other sensitive topics can be discussed though.

“In lots of classes we talk about the Cultural Revolution and the June 4 disturbance, in order to understand history better and to better choose the way forward,” he said, referring to the bloody crackdown on pro-democracy demonstrators on and around Beijing’s Tiananmen Square in 1989.

In the class on Xi’s thought on environmental protection and how to integrate that with economic development – likely chosen for foreign media to listen in on as the subject matter is far from controversial – students were also shown pictures of a boutique hotel in the mountains of eastern Zhejiang province.

The students gasp as the teacher tells them that in this part of China where the scenery is “nothing special”, the hotel can charge 3,800 yuan ($552) a night for a room with sweeping views of the mountains outside.

Good both for the local economy, and the local government which can collect taxes on the hotel, the teacher tells them.