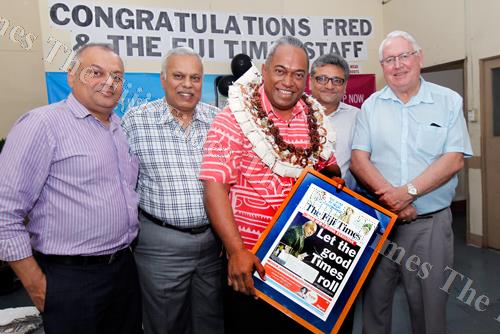 THE Fiji Times uses criticism levelled against it as a constructive feedback rather than an attack on its own ability, this is the prowess of the brand The Fiji Times, says Fiji Times Ltd board chairman Kirit Patel.

Mr Patel told staff members of Fiji Times Ltd during a lunch hosted by the company to acknowledge editor Fred Wesley’s achievement as the Media Executive of the Year at the recent prestigious PANPA industry awards in Sydney, Australia, that the Fiji Times Ltd doesn’t allow criticism to dominate its thoughts.

“This was always the case for Fred as he listened to the criticisms, but never allowed it to stop him from working harder.

“As editor, at times he was put in a difficult situation along with other news reporters, but he never got frustrated or discouraged by challenges, but saw it as an opportunity to outshine,” Mr Patel said.

Mr Patel thanked the editorial staff for reporting news that was in line with the newspaper’s goal to cover news without fear or favour.

The award, Mr Patel said, showed positive reflection of the editor’s empathy and a sense of commitment to make a difference in people’s lives.

“As we say the path to success is never a straight line and this is no exception to The Fiji Times. Notwithstanding the challenges at all times, we stayed level headed as a team to defend ideals of good journalism,” he added.

To be at the forefront of Fiji’s oldest newspaper, Mr Patel said it required a person dedicated to good journalism like Wesley.

“Our readers locally and abroad will continue to see that we have a sense of commitment to make a real difference to people’s lives and consequently making positive contribution to society and the nation that we live in,” he added.

As the owner of Fiji Times Ltd, Mr Patel reassured staff that they would continue to stand behind them and provide a path to strong ethics and a workplace safe for people.