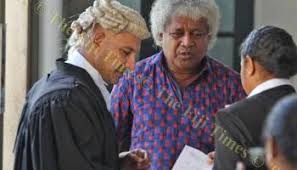 DEFENCE lawyer Aman Ravindra-Singh today submitted that prosecution witness iTaukei Affairs Ministry PS Naipote Katonitabua gave no evidence to support the allegation of sedition against his letter writer client Josaia Waqabaca.
Mr Waqabaca stands trial in the High Court in Suva to answer to a charge of submitting for publication an article written by him with a seditious intention.
In his oral submission to support the application for a no case to answer, Mr Ravindra-Singh said Mr Katonitabua’s evidence did not support the allegation that Mr Waqabaca had a seditious intention to promote feelings of ill-will between classes of the population of Fiji.
Instead, he said the only evidence Mr Katonitabua provided was hearsay that he picked up from his department.
And the Lautoka-based lawyer added the PS had also confirmed there was nothing hateful in the article against Muslims in Fiji.
Alongside Mr Waqabaca, also standing trial are Nai Lalakai editor Anare Ravula, The Fiji Times editor-in-chief Fred Wesley, the company’s general manager and publisher, Hank Arts, and the Fiji Times company.
Ravula and Wesley are each charged with one count of having aided and abetted the publication of the letter in the Nai Lalakai newspaper on April 27, 2016, that was alleged to be seditious.
Mr Arts is charged with one count of publishing a seditious article in the company’s vernacular newspaper.
The Fiji Times is charged with one count of printing a seditious publication.
A detailed report in tomorrow’s edition of The Fiji Times and in our E-edition.