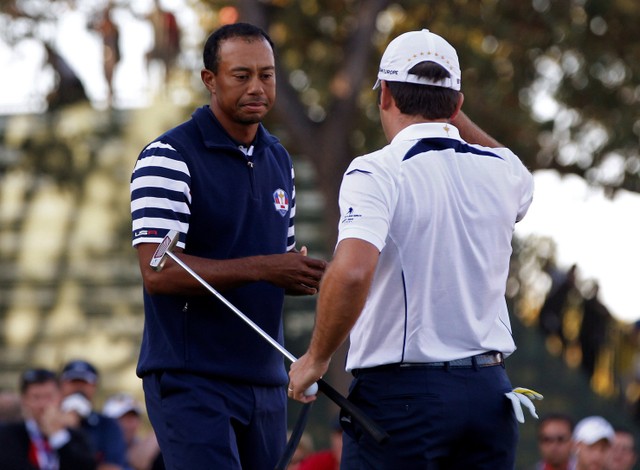 PARIS (Reuters) – The spiralling interest in the Ryder Cup means the biennial golf showpiece hardly needs hyping up but the stunning return to form of Tiger Woods, culminating in his first tournament victory for five years on Sunday, has undoubtedly added some extra French frisson to the event starting in Paris on Friday.

Europe’s top player Justin Rose finished in a share of fourth at the PGA Tour Championship to scoop the $10 million FedEx prize but all eyes were on Woods, who has overcome four back surgeries and very public personal drama to return to the top of the game.

A year ago he could barely walk, let along swing a club and few if any thought he would ever get close to the form that saw him bestride the game for so long.

Yet here he is, if not quite back to his best, then certainly back to a level capable of going toe to toe with anyone else in the game.

“My body was a wreck, I was beyond playing. I couldn’t walk, I couldn’t lay down without feeling the pain in my back and leg,” Woods said on Sunday looking back to his situation before he underwent spinal fusion surgery in April 2017.

“It’s been an unbelievable season from beginning to end and I appreciate it much more now than 20 years ago.”

He now heads to Paris as part of a U.S. team seeking to win overseas for the first time since 1993.

Although his ranking was so low he needed a captain’s pick to make the team, his recent surge in form and confidence means that he will undoubtedly be one of the focal points of Jim Furyk’s team and the man the fans at the Le Golf National will want to follow.

The irony, however, is that Woods’ Ryder Cup record is awful.

In seven appearances he has been on the winning team once, and that was back in 1999. Though his singles record is strong, in foursomes and fourballs he has won nine, lost 16 and halved one.

When it is taken into account that most of these matches took place when he was far and away the best golfer in the game and winning majors for fun, it is a shocking, but not that perplexing record.

During his prime years Woods was a focussed, solitary figure, able to communicate with fellow players or the media only through a fixed-smile veneer that gave nothing away and invited nobody in.

Now 42 and having hit rock bottom in his personal and professional life, he is said to be a different person than when he won his 14th and last major 10 years ago.

Finding a partner for Woods was always a challenge for successive U.S. captains for various reasons but this time, with Woods back after missing the previous two editions, there is likely to be a longer queue with their hand up than in previous years.

“I believe this time Tiger Woods will be a definite asset,” Europe’s 2014-winning captain Paul McGinley said at the weekend.

“His competitiveness is growing week by week and his rapport with fellow team members will be stronger.”

Current captain Thomas Bjorn, who had some memorable battles with Woods as a player, also welcomed his return.

“For such a big event you want big personalities, big profiles… I’m excited about seeing Tiger back in the fold.”