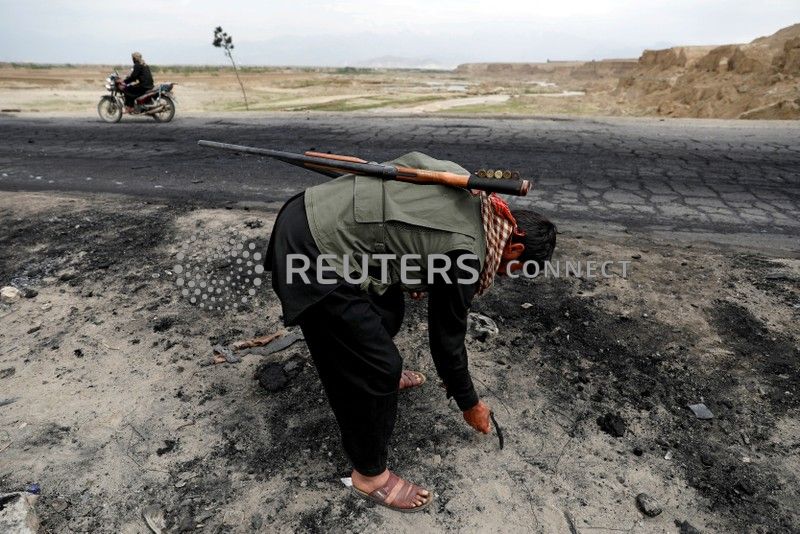 An Afghan man inspects the site of a car bomb attack where U.S. soldiers were killed near Bagram air base, Afghanistan April 9, 2019. REUTERS/Mohammad Ismail

WASHINGTON (Reuters) – Three U.S. service members and a contractor were killed in Afghanistan by an improvised explosive device on Monday, the NATO-led Resolute Support mission said in a statement.

Three U.S. service members were also wounded in the incident near Bagram air base close to Kabul, the statement said.

Violence has been relentless in Afghanistan even though Taliban militants have held several rounds of talks with U.S. officials about a peace settlement. The talks began late last year, raising hopes for an end to the conflict.

Colonel David Butler, a spokesman for U.S. Forces- Afghanistan, said a car bomb had detonated near the security convoy, which lead to deaths and injuries.

The Taliban claimed responsibility for the attack.

The latest deaths bring the number of U.S. service member deaths in Afghanistan to seven in 2019, and a total of 68 U.S. military deaths since January 2015, according to U.S. government and NATO reports.

The death toll is one of the deadliest recent attacks against U.S. personnel. In November, a roadside bomb blast killed three U.S. service members near the central Afghan city of Ghazni.

The war has taken a much larger toll on Afghan security forces and civilians.

President Ashraf Ghani, speaking at the World Economic Forum in January, said that about 45,000 Afghan security forces have been killed since he took office in September 2014, which works out to an average of 849 per month.

The Resolute Support Mission consists of 17,000 troops, about half of them from the United States. A smaller number of U.S. troops operate in Afghanistan under a counter-terrorism mission.