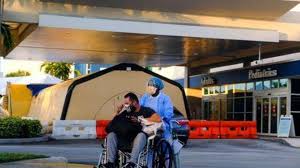 (Reuters) – Alabama, Florida and North Carolina reported record daily increases in COVID-19 deaths on Tuesday, a trio of grim milestones that follows the first nationwide increase in fatalities since mid-April as some U.S. states rushed to reopen.

The number of new cases reported daily began rising about six weeks ago, especially in southern and western states such as Arizona, California, Florida and Texas, which have been quick to lift restrictions meant to control the spread of the virus.

New coronavirus cases rose in 46 of 50 U.S. states last week over the previous week, according to a Reuters analysis of data from The COVID Tracking Project. So far in July, 28 states have reported record daily increases in new cases.

Florida on Tuesday reported 133 new COVID-19 deaths, raising the state’s death toll to more than 4,500. Its previous record increase was 120 on July 9. Alabama reported a record increase of 40 deaths and North Carolina 35 deaths, bringing each state’s total to over 1,100.

The rising cases and deaths have left educators from California to Wisconsin opting for online learning rather than a return to classrooms when the school year begins in a few weeks.

The decision puts the districts at odds with U.S. President Donald Trump, who has threatened to withhold federal funds or remove tax-exempt status if they refuse to reopen classrooms, even though most schools are financed by state and local taxes.

Trump’s campaign views the reopening of classrooms, enabling parents to get back to work, as a key to economic recovery and a boost to his re-election chances on Nov. 3.

New York state plans to reopen its schools in areas where the daily infection rate is below 5% of all COVID tests. The state has averaged an infection rate of about 1% for several weeks and is one of only four states where cases fell last week, according to a Reuters analysis. New York City, where social distancing and mask wearing are widely practiced, recently reported no new COVID deaths in a 24-hour period for the first time since March.

Florida still plans for its schools to resume in-person learning in August. The state recorded over 9,000 new cases on Tuesday, down from 12,000 on Monday and a record increase of 15,000 on Sunday.

Teachers in Loudoun County, Virginia, protested outside school headquarters on Monday with one woman fully enclosed in a white lab suit and face shield holding a sign that said, “Our new school uniform.” To keep physically distant, the teachers honked their car horns in unison, according to a video.

Faculty members were protesting against a school board plan for hybrid instruction that would include two days of in-person teaching, according to local media.