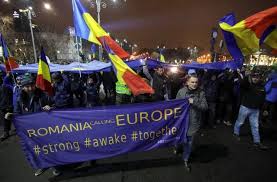 Protesters carry a banner during a demonstration against judicial changes in Bucharest, Romania, February 24, 2019. Inquam Photos/George Calin via REUTERS

BUCHAREST (Reuters) – Thousands of Romanians protested across the country on Sunday after the government passed an emergency decree that critics said chipped away at prosecutors’ independence in one of the European Union’s most corrupt states. The decree, approved without public debate, is the latest in a slew of legislative and personnel changes by the […]