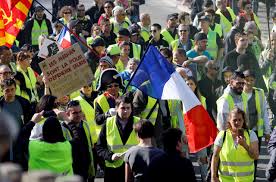 PARIS (Reuters) – Tens of thousands of people marched on Saturday in Paris and other cities and dozens were arrested as France’s “yellow vest” movement staged its 15th consecutive weekend of demonstrations against the government. Some 46,600 people joined the protests nationwide, including 5,800 in the capital, the Interior Ministry said. That was up from […]