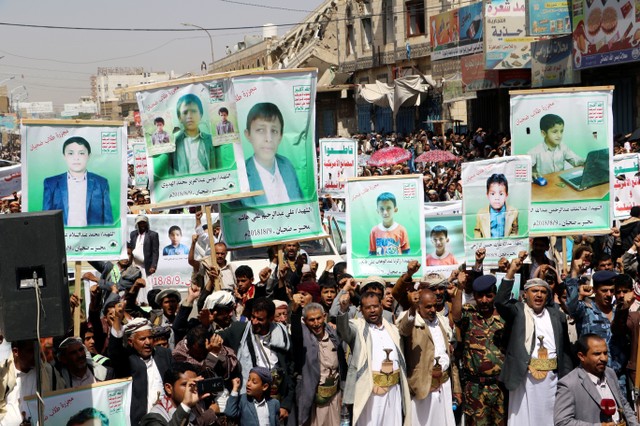 Houthi followers demonstrate to show rejection of an offer made by the Saudi-led coalition to pay compensations for victims of an air strike in Saada, Yemen September 5, 2018. REUTERS/Naif Rahma

SAADA, Yemen (Reuters) – Thousands of Yemenis massed in the Houthi stronghold of Saada on Wednesday, calling for the prosecution of the Saudi-led coalition for an air attack last month that killed dozens of people, including 40 children travelling on a bus.

After initially saying it was a legitimate strike and accusing the Houthis of using children as human shields, the coalition said on Saturday it accepted that the attack was unjustified and pledged to hold accountable anyone who contributed to the error.

The rare concession followed mounting international pressure, including from allies, to do more to limit civilian casualties in the 3-1/2 year civil war that has killed more than 10,000 people and pushed the country to the brink of famine.

Yemen’s first round of peace talks in almost three years are expected to start in Geneva on Thursday, aimed at getting the Saudi-backed government and the Iranian-aligned Houthi movement to work towards halting the fighting, removing foreign forces, and establishing a unity government.

The protesters carried huge pictures of some of the children killed in the air strikes as they walked along a main road in the city. Other banners urged a boycott of U.S. products.

Addressing the crowd, a Houthi official and called on the U.N. Security Council and the International Court of the Justice to “prove their humanity”.

“We insist that all countries supporting this criminal coalition with weapons are directly involved in the bloodshed against children and women in our country,” Abdel Salam al-Seliehy said.

“(Those countries) will be haunted by the shame of this crime and will not escape a legal action,” he added.

Saudi Arabia and the United Arab Emirates, the two Gulf states leading the coalition, receive Western political support and buy billions of dollars a year in arms from the United States and European powers including Britain and France.

The Pentagon believes that its assistance, which includes refuelling coalition jets and training in targeting, helps reduce civilian casualties.

Defense Secretary Jim Mattis told reporters last week the United States recognised such mistakes as the bus attack were tragic. But he added: “We haven’t seen any callous disregard by the people we’re working with.”

The coalition accuses the Houthi movement of importing weapons and ballistic missile from the Gulf countries’ arch-rival Iran for more than three years. The Houthis and Iran deny the accusations of smuggling weapons.

The coalition has intercepted several missiles fired by the Houthis towards Saudi Arabia in recent weeks.