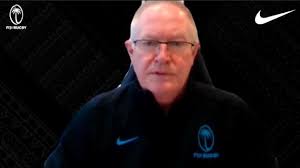 The interim chief executive officer of the Swire Shipping Fijian Drua has paid tribute to the Government for its financial support to the Drua, which has materially benefited the team’s historic maiden voyage in a revamped Super Rugby Pacific competition that features five New Zealand and Australian franchises alongside fellow newbies Moana Pasifika.

Brian Thorburn said funding by the Government to support the Drua’s campaign was timely.

“The government’s been fantastic,” he said.

“We received a timely intervention from the government, which eased any economic pressure on the operations of the Drua, especially after the COVID-19 crisis.

“The total financial package by the government towards the Fijian Drua has enabled us to “sail” through unchallenged during this difficult time with the pandemic. We fully appreciate the gravity of what the government has offered to the Drua.

“It has greatly impacted everyone across the country.

“We’re pretty excited about the long-term future of the game including the Drua’s participation in a worldclass competition.

“The government has assisted us immensely, not only through their enormous moral support and encouragement towards the Fijian Drua but their direct financial support in the form of equity.

“The government is committed to the Drua’s cause and we received $3 million a couple of weeks ago. “There’s another $3m in store as part of the government’s investment in the Fijian Drua.”

Thorburn added he would “keep knocking on the government’s door” for further financial assistance.”