The Whiteside to badminton 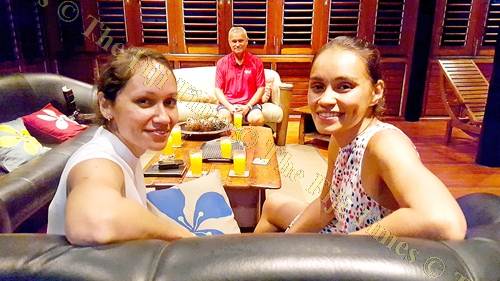 A FEW people are given the honour and privilege to represent their country on the battle field or on sporting fields.

For Barry Whiteside, a former Reserve Bank of Fiji governor, it is a great honour to be part of the 2018 Commonwealth Games in Gold Coast, Australia with his two daughters Karyn Gibson and Andra Whiteside.

Barry, 62, is the section manager for badminton while his daughters were chosen to fly Fiji’s flag at the games.

This reporter got to know Andra about three years ago during a badminton tournament coverage and since then she had been updating this newspaper with the news from the Fiji badminton fraternity of which she is the secretary.

Andra, 28, started playing badminton when she was only six years old — seeing her father involved in the sport.

She represented Fiji at the 2007 and 2011 Pacific Games and was part of the 2006 Commonwealth Games in Melbourne.

“I have been playing for a very long time and I have been able to play in a number of tournaments and travelled to overseas competitions. The journey had been really good. It is a real honour for me to represent the country,” she said. “Not many people have the opportunity to play at the high level, so I am grateful for that.

“My family is my biggest source of inspiration — it is a family sport. My elder sisters encouraged me to play and they pushed us. In the beginning, it was like I was forced into the sport, but later I realised the value sports could bring in terms of health benefits.”

Andra, who works in the marine environment field, said the Commonwealth Games this year could be her last competition at a competitive level.

“In future, I want to see badminton grow in Fiji. I have played and competed a lot in tournaments. I think it’s time for me to see its development and how the standard could be raised in Fiji,” she said.

Her elder sister, Karyn, has made a comeback at competitive level this year after taking a break from her last assignment at the 2006 Commonwealth Games.

This is her third Commonwealth Games after first representing Fiji at the 1998 Games in Kula Lumpur, Malaysia. She is married and has two sons.

“I competed at my first Commonwealth Games at the age of 14 and then it was no turning back for me,” the 33-year-old said.

Andra is the reigning queen of badminton in the Pacific after she won a gold medal at the 2011 South Pacific Games.

The interesting fact is that Karyn was the reigning queen but after taking a break from the sport, the baby of the house took over the legacy.

Andra and Karyn’s pillar of support, their dad Barry, is a proud father as the three embark on representing Fiji and her people.

“Badminton is a minor sport in Fiji and at times it is hard to keep it going. It is the fastest racket sport in the world. The speed of the shuttlecock passing the net is 400 kilometres per hour when it is smashed,” Whiteside said.

“The Fiji Times had been giving us a lot of publicity, but in the past, badminton has been called squash and labelled table tennis by some reporters. The sport was not known by many at that time.”

Barry said his interest in the sport came when he was a student at Suva Grammar School in late 1960s.

“After retirement I have been relaxing and it enabled me to take on the role of manager.

“When we were at Suva Grammar School in the late 1960s, we started badminton and before that my family never played badminton as I used to play hockey.

“There were local competitions at the Suva Badminton Club and that was when I took up badminton seriously.

“I am happy that my children took up badminton and I hope the next generation would also take up the sport.”

Barry was also a national hockey rep and played cricket for Suva.

He said coach Brent Munday was very supportive towards the players.

“When he (coach Munday) took the team to the Oceania Badminton Championship, he put in funny requirements where if someone did not do things right then that person had to wear a shower cap for the whole day at training.

“Right at the end even the coach had to wear the shower cap. We used to travel with the other countries in the same bus and most probably they would be thinking why someone was wearing a swimming cap.”

“Those types of things brought the team together.”