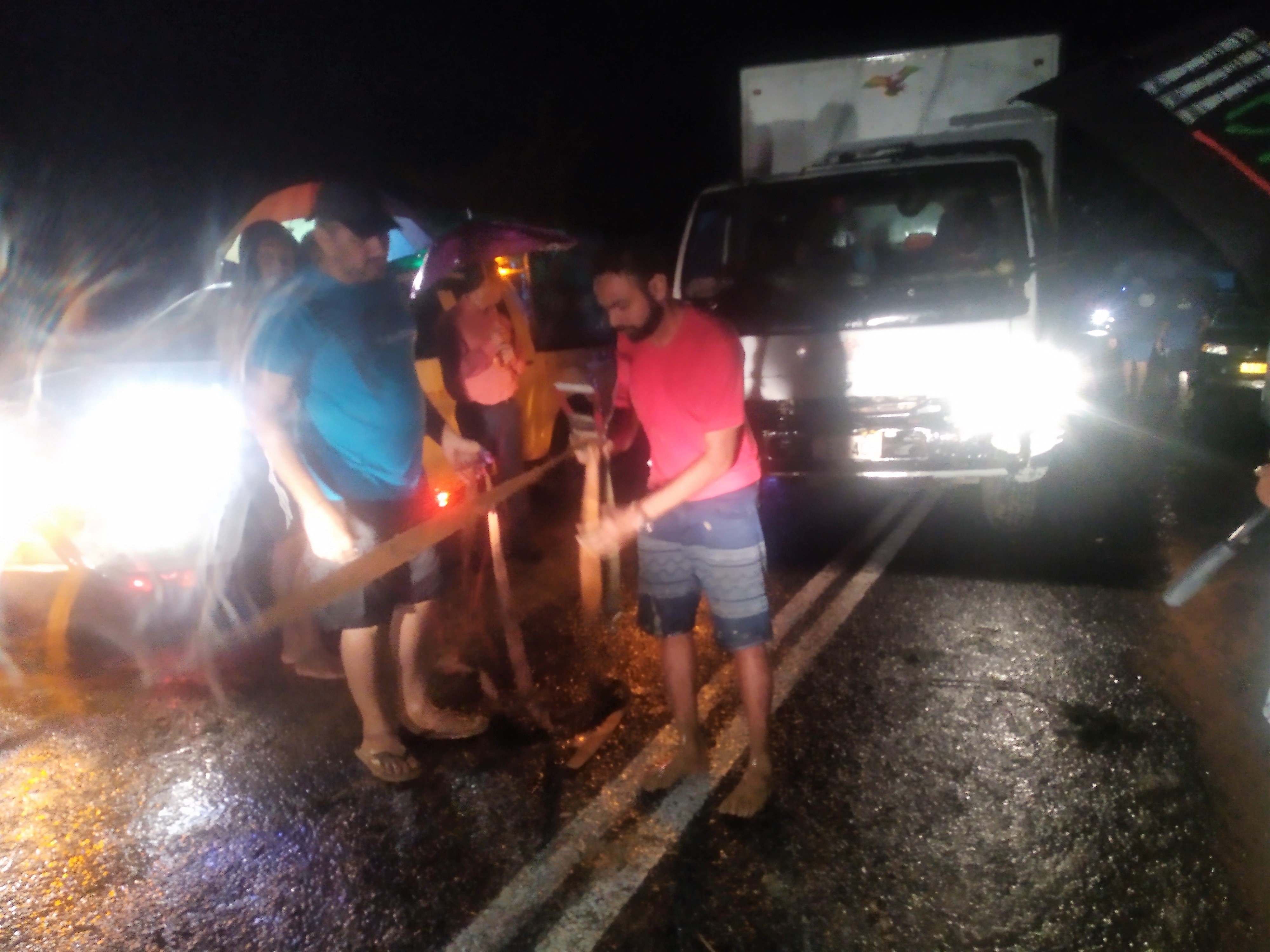 Two men tighten the rope that will hold the loader as it pulls away fallen trees at Talenaua. Picture: SIKELI QOUNADOVU

The time had just slipped past 7.30pm.

We were returning from a funeral in Nahoho, Nadroga and were making our way towards Suva — I didn’t know it would be the longest trip ever.

We would get stuck at Talenaua, Serua for more than 10 hours after the road that connected Naboutini, Serua got flooded in what should have been just a two hours trip.

This is a story of resilience and kindness, about a group of people who came together to help the hundreds of vehicles to cross when they didn’t have to.

It was at Talenaua when we came to a stop, heavy rain had caused a massive landslide and had blocked off the road.

It was after 6pm and hundreds of commuters were to be stuck here for about 11 hours.

Firstly, I will strongly advise against driving across flooded waters.

We have this problem of a reactive approach and not being proactive. I must thank God for his protection, we were blessed there were no accidents, let alone injuries.

When a National Fire Authority truck drove past, I asked a personnel when it would be safe to go across and he responded the road could be cleared in five hours.

That was about 7pm — it was the last time I saw that fire truck.

After two hours of waiting, I decided to take a walk and see for myself the site of the landslide.

Mind you, I still had a fever, and walking was a bit of a hassle.

After about 15 minutes I witnessed something that really touched my heart.

In the face of adversity, Fijians banded together to help.

The fire truck was not to be seen anymore — nor could I see a police officer, neither an ambulance or a government vehicle close by. Maybe they did come at a later stage, but I was not aware.

Up in the distance I counted about six men — one had a digging fork while the other a spade and the rest had sticks digging and trying to clear the debris.

A loader and a truck were on standby to assist in pulling the fallen trees.

Barefoot, with no safety equipment, let alone safety wear, out in the cold, and in the pouring rain, in the cover of darkness with the only light coming from the trucks — these men worked tirelessly — they did this for more than 10 hours.

We finally cleared Talenaua about 5am arriving home at exactly 6am.

To those brave men, some of whom I was told were from nearby villagers and settlements, you are the unsung heroes.

The world may never know your name but to me and the hundreds at Talenaua on April 20, 2019, we will remember you.

I would also like to thank the young men and women who stood on the side of the road directing traffic from Navutulevu to Naboutini from Korovisilou to Talenaua and every other place.

We will not be able to repay your kind deeds, but it is my humble prayer that you will be blessed. The 12-hour road trip brought to life the words of my aunty Ema Tagicakibau;

“That light will always supersede darkness, that all we need is hope in moments of despair, faith when there is doubt and a little bit of faith to avoid frustration.”

As dawn broke over the horizon, I realised that it was resurrection day.

I give praises that no one was harmed. Vinaka vakalevu to you my fellow brothers. This article is dedicated to you all.