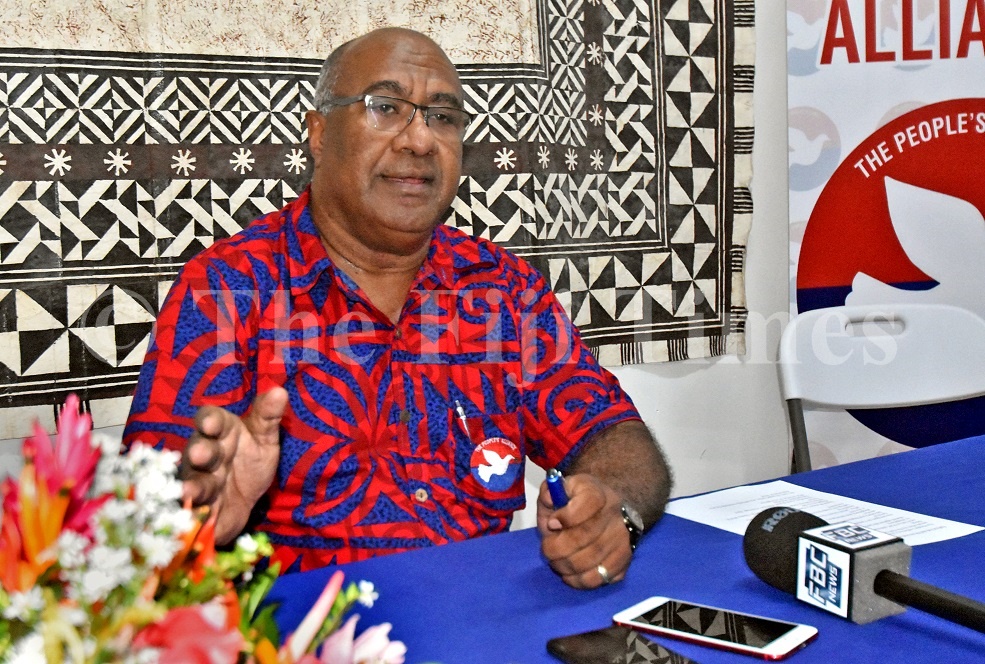 The People’s Alliance party has expressed shock and anger at the “unjust persecution” by the FijiFirst party leading to it being referred to the Fiji Independent Commission Against Corruption (FICAC).

Deputy Party leader Manoa Kamikamica said the PA had not even had a chance to respond to the FijiFirst letter.

He blasted FijiFirst party general secretary Aiyaz Sayed-Khaiyum’s claim to have copied letters of the allegations to party members as untrue.

“Around 6pm on September 20, 2022 FijiFirst general secretary and registered officer Aiyaz Sayed-Khaiyum made serious allegations and defamatory statements at a press conference in the FFP office, which haven’t been provided to us despite him telling the media the People’s Alliance was copied in the complaint,” he said.

“No such 19 pages letter was directly received by any executive or cited copied member of the party last evening or until early this morning when Lynda Tabuya got her letter.”

Mr Kamikamica said they endured anxiety and confusion as they waited for a copy of these allegations.

“The FFP general secretary is as usual running roughshod over everything. These are clear signals of desperation and cowardice,” he said.

“We will not be cowed by fear when we have done nothing wrong, except to be on the receiving end of blatant political thuggery.

“This manner of political persecution has happened to our leader in the past, again causing chaos on the eve of the 2018 elections, so this modus operandi is predictable.

“The People’s Alliance and the people of Fiji will not take this lying down.

“I want to make it clear that The People’s Alliance reserves the right to lodge complaints against the FijiFirst party for blatant vote buying tactics and practices,” he said.

Meanwhile, yesterday afternoon the FEO said in a statement it wrote letters to make enquiries on the activities of Rock the Vote Fiji and Covid-19 Maternity Relief Fund held by The People’s Alliance party after a complaint received by the FijiFirst party on September 20.

In a statement yesterday Supervisor of Elections Mohammed Saneem said the letters were sent to Lynda Tabuya, various bus companies and The People’s Alliance.

He said as of 5pm yesterday, he had referred various individuals and implicated political parties to FICAC for the matters that were established to have already been a probable breach of the Electoral Act and the Political Parties Act.

“On September 22, the SoE also raised public concerns on the organisation known as ‘Rock the Vote Fiji’ which has been noted to have been actively campaigning for and has the active involvement of senior representatives of The People’s Alliance,” he said.

“It is also noted that Rock the Vote Fiji has since then shut down its Facebook page.”

He said the FEO had over 325 screenshots of the Facebook activity of this group and the same had been analysed.

“The FEO has also made specific enquiries in relation to breaches of sections of the Electoral Act arising out of the activities of Rock the Vote Fiji and the use of the Covid-19 Maternity Relief Fund.”