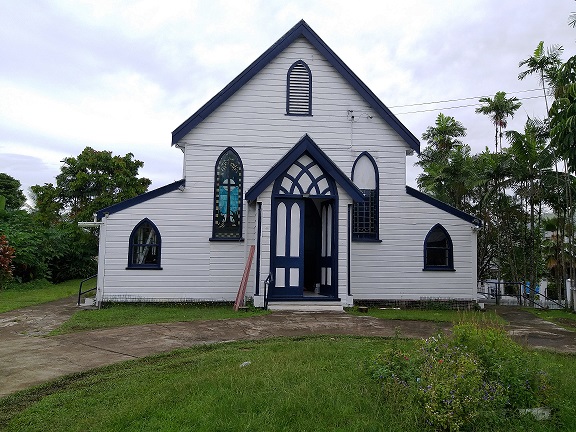 IN August 2014, two young musicians with a love of the sea decided to sail to the Pacific with a mission – to find musical instruments in need of repair and be restored.

Jérôme Giersé an organist and Alexandra Gelhay, a musicologist were part of the Music Fund project where they initially collect musical instruments from their country in Belgium, have them repaired and send them to partner music schools in the developing world and in conflict zones.

However, this trip was different.

Their two-year journey would see them berthing in Suva in 2016 to look for one of the oldest pipe organs in Fiji and the Pacific at an old quaint church.

That church is St Andrews Presbyterian Church – considered one of the oldest Christian church building in Suva.

It sits along Gordon St marked by its white picket fence; its wooden building almost dwarfed by the tall concrete buildings around it.

“The young couple were travelling in their own yacht and they were sponsored to go around the Pacific to look for pipe organs and the only one they found was this one at the church,” describe Reverend Dr Bruce Yeates, the church’s Minister in Association.

“The first pipe organ for the church was a New Zealand craft organ; built in 1908 to celebrate the 25th anniversary of the church, at a cost of 470 pounds, 80 years later it needed to be restored,” he shared.

Reverend Dr Yeates has been living in the Pacific since 1975 and a lot of that last century was spent in Papua New Guinea.

An academic by profession, he became the ordained member of the church in 2007 when the church became independent of the Presbytery of Auckland.

“There were two other pipe organs in Suva, one at the Anglican Holy Trinity Cathedral and the Roman Catholic Cathedral and it seemed about the same time that all their pipe organs needed repairs but it was St Andrews that decided to keep a manual pipe organ. The other churches decided not to do so. For me personally, I would like to see the church keep it and restore it because it’s quite unique to the Pacific and Fiji. It’s an instrument worth preserving.”

The manual pipe organ was refashioned and replaced and the church continues to serve their congregation which has changed from the established settler families to a more Pacific representation.

The church is built entirely of wood and has a distinct design similar to rural churches overseas.

But back in 1885, this church was the place of meeting and entertainment among the early European settlers of Suva.

It is a memory of Suva and one that holds a lot of heritage.

ON September 29, 1883, The Fiji Times (known then as the Suva Times) ran a news piece announcing the official opening of the church for public worship.

The Suva Times read: “The interior of the building does not belie the exterior, and is very neatly and comfortably fitted up. It is well lit and the colour of the walls has been chosen so as to give the building a light and pleasant appearance.

“Ventilation, such an important matter in this climate, has been thoroughly attended to; and the result altogether is one with which the Presbyterian body may feel very great satisfaction. The church has been built to seat 150 persons with ease, this size being deemed quite ample for the requirements of one denomination in the present position of Suva.”

Liturgy was held for the first time that year. One hundred and thirty-five years later, that tradition continues to this day.

“The church in its early days was not like the Methodists where it was brought from outside, it was actually established by the settlers who were here and who were Presbyterians,” said Rev. Dr Bruce.

“It was in the sense homegrown or colonial in those days those days and you see many of our chairs here on the front they are what you call the captain’s chairs. Many of the sea captains that were in charge of the harbour and the ports as well as doing the sailing of ships were Scotsmen or New Zealanders; they would be based here and their families would attend church here.”

Originally the church was going to be based in Levuka in 1882 according to the church meeting documents.

Church ministers from Australia had come to see about establishing a Presbyterian church but when the capital was moved from Levuka to Suva
in 1882, it was no surprise then to move to Suva.

The first records maintained by the church, report the meeting on January 16, 1883 of a small, self- appointed committee in the Suva school house to consider providing a Presbyterian place of worship in the town.

Those present agreed that it was desirable that a church for the purpose of the Presbyterian form of worship be erected without delay on the current property.

Eight months later, on September 23, 1883, the new church was opened for worship.

The first established minister of the Church, Reverend L.W Rennison was appointed by the Church of Scotland in late 1884.

However, the original building was destroyed in a cyclone that hit Suva on January 5, 1895.

The current wooden church that you see today was built and opened in April 1895.

The church is designated as a Heritage Building by the National Trust of Fiji.

“So people like Sir John Bates Thurston (Governor of Fiji) chaired the first committee that established this church at that time,” said Reverend Dr Yeates.

“So it was very much a colonial settler church, the long-established families such as the Burness family, the Thomson family whose descendant is Peter Thomson (Fijian diplomat who served as the president of the General Assembly of the United Nations) were among the early congregation. In fact,
the stained windows on the church were done in memory of his parents Sir Ian Thomson and Lady Nancy Thomson. The church has a lot of connection to the public servants during the colonial administration, the shop keepers many of them were Presbyterian who wanted a church for themselves.”

The Fiji Times in the 1950s to 1960s ran sermons from the church in the newspaper.

On Sundays, the writer would reflect on what was preached on a particular day.

The strong influence of the church

Being one of the first buildings built in Suva, the church has seen a lot of interesting things, where it played a part in its history.

Reverend Dr Yeates said the congregation began to change and moved from the settler established families to incorporate more of the students from the Pacific Theological College and the University of the South Pacific which was just established.

“The church was very much part of the establishment of the Pacific Theological College, the Fiji Council of Churches, the Pacific Conference of Churches. Even though it’s a small church; it’s had an incredible amount of influence in the establishment of the Fiji Council of Churches and interfaith Fiji. The Pacific Islanders that come to Fiji study or work began to worship here including the Kiribati Uniting Church, many of their members come here still and the PTC. So during the ‘70s, it became more of a Pacific church as opposed to a Fiji church and the congregation has remained very plural and accepting of many different denominations that worship here together. That’s one unique aspect of the Presbyterian church.
There are different theological perspectives so one has to be very open to that and recognise the diversity and honour the diversity of the groups that worship here as well as their way of thinking about the love of God and experience in their lives.”

“I was trained in the Presbyterian Church in Canada before coming to Fiji and I changed my membership from Canada to here. I have been part of the church since 2005 and I carry my Fiji passport with pride. I am a dual citizen,” he said with a smile.

“This church is Fiji’s heritage, it has been part of Suva’s history since this city was born. When the coups of 1987 and 2000 occurred, a vigil was held and people of many faiths sought refuge here. I hope that it’s protected for a long time.”