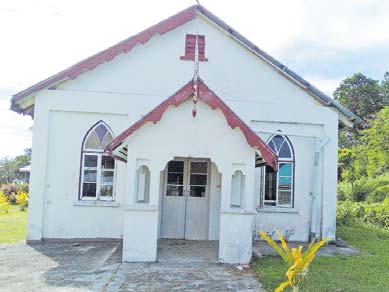 The Serua Island Methodist Church today, which was built on the foundation ground of the first school on the island before it moved to Korovisilou. Picture: JOHN KAMEA

A long time ago, two brothers from Korolevu, Noikoro in the heart of Navosa had one of the most important conversations they ever made as siblings.

The younger of the two decided to leave home in search of new land and possibilities.

It was time to say goodbye.

While the exact reason behind their separation is not clear, we do know the younger brother made his way southwards and his people finally settled on Serua Island.

He left his older brother and his people behind in Navosa.

Before the departing brother left, his grandmother called him and gave him a package that looked like a family heirloom.

His grandmother said, “this will sustain you during your journey!”

Inside the package were a few matadra, a traditional breed of taro and ota or saulaki (edible green ferns).

Both the matadra and saulaki are the totemic kakana (traditional food) for the people of Korolevu.

Noikoro, the district the brothers belonged to, later became one of the prominent interior communities established by Sir Arthur Gordon in 1877, three years after the historic cession of 1874.

Among those provinces was Colo West, whose first buli (district head) was a chief called Nabeka, the Tui Noikoro at the time.

As they descended to the coast, engaging in wars in the process, their position was strengthened as other “groups” joined in, expanding the original size of the yavusa members that left Noikoro.

Many of those who migrated out of Noikoro or joined along the way as allies or qali, remain closely associated to the vanua of Korolevu, Serua today.

“According to stories passed down by our elders, the journey from Korolevu finally reached a hilly place above what is now Naviti (resort). Our ancestors called it Tadra, meaning to sit, in our dialect,” Robanakadavu, 69, said. “A huge baka tree (banyan) grew above Tadra. Its stringy roots were used by children as swings, and because it provided the perfect vantage point, children would alert the village if there was any approaching visitor or enemy sighted.”

One day, a conflict developed in Tadra, believed to have been fuelled by playing children.

As a result, a faction of the group, the people of Lutuya, were asked to leave (perhaps as punishment).

They moved somewhere further downhill, not too far away from Tadra, and settled near a place called Navau, close to where The Warwick Fiji (resort) is today.

Navau, at the time, was occupied by the people of Burenitu.

“We from Vunimasei (tokatoka of Lutuya) and the people of Navau became neighbours. We lived further downhill from them,” said Robanakadavu, a descendant of the Lutuya clan himself.

Later, the people of Korolevu migrated further down from Tadra to the coast and settled at Korolevu.

This time, among them, were two brothers, believed to be of chiefly stock.

“The older one later settled on Serua Island as the Vunivalu while the younger brother followed the people from Navau and settled at Culanuku. Natuilevu was his name,” Robanakadavu recalled.

By the time the people of Korolevu arrived on the coast, the island was already occupied.

The first people there were the people of Narukusara.

Before settling on the island, the contingent from Navosa first established a village at a place called Sanamua.

This place is regarded as the last village settled by the people of Korolevu on Viti Levu soil before they crossed the sea to Serua Island to make it their new home.

“That place has been given to us as our ikanakana (a special piece of land gifted from a larger parcel of land for sustenance and livelihoods),” Robanakavu said.

“When our ancestors moved in, there were whispers of disposing of the original inhabitants of Serua.”

Robanakadavu said eventually it was decided that the people of Narukusara should not be evicted by war.

Through strategic negotiation, the powerful Vunivalu lived with the first settlers.

“The Vunivalu said let’s not remove them. We are from the interior and it might be a good idea to live with them since they are skilled fishermen and seafarers. Let them be here with us so they can fish for us.”

Robanakavu said when the Native Lands Commission under David Wilkinson was set up, it heard that the island was “given in good faith”.

From then until today, the island of Serua has been regarded as the traditional seat of the paramount chief of Serua and the vanua of Korolevu.

Robanakadavu said the word Serua, according to what he heard, was coined by the people of Narukusara who were first to arrive on the island.

“On their way here they spotted two hills on the island and decided to call it “Serua” or “two parts”.

Various historical texts suggest that the makeup of Serua Island, district and province all seem peculiar.

In 1912, G.V.Maxwell, the chairman of the Native Lands Commission of the Colo West Province pointed this out.

“There are instances in which fragments of a mataqali have found their way to places remote from their original home and have founded entirely fresh yavusa,” Maxwell noted, “A conspicuous example of this occurs in the case of the kai Korolevu, the chief yavusa of Serua, of which their Vunivalu is the head.”

“These people were originally a fragment of the Noikoro yavusa, from the heart of Colo West, which fought its way down to the coast and attained its present position through its prowess in war.”

According to John Garrett in “To Live Among the Stars”, in the year 1877, Serua Province was carved from Rewa Province under a ‘Buli- Roko’ called Ratu Kinijoji Gagabokola.

Timothy Macnaught in “Fijian Colonial Experience” further noted that before 1874, Serua was “one of the least stable areas”.

Macnaught said David Wilkinson’s Native Land Commission findings noted that the people of Serua were “mixed both in their tribal and mataqali distinctions”.

He added that Serua had been a battleground for the armies of the people of Korolevu and their arch-enemies from Nabukebuke (Namosi).

Later, Serua also had a dispute revolving around the tikina of Komave.

According to NLC findings, the tikina of Komave was part of Serua during the NLC sittings held in 1932.

When the Colo West province merged with Nadroga to become Nadroga/Navosa, the tikina of Komave was made part of Nadroga/Navosa and not Serua.

The lower part of Namosi’s provincial boundaries, which is the tikina of Veivatuloa, increased in size.

This was because of the transfer of some parts of the Serua Province to the Namosi Province.

In the 20th century, Serua province emerged remarkably under the leadership of one of its notable chiefs, Ratu Aseri Latianara.

Ratu Aseri took over the post of Roko Tui Serua from his dad in 1907.

He was confirmed in the position two years later and installed as Vunivalu in 1912.

Macnaught said he won the loyalty of the province of Serua and was a chief “strong in the government, in the vanua and in his words”.

• History being the subject it is, a group’s version of events may not be the same as that held by another group. When publishing one account, it is not our intention to cause division or to disrespect other oral traditions. Those with a different version can contact us so we can publish your account of history too — Editor.