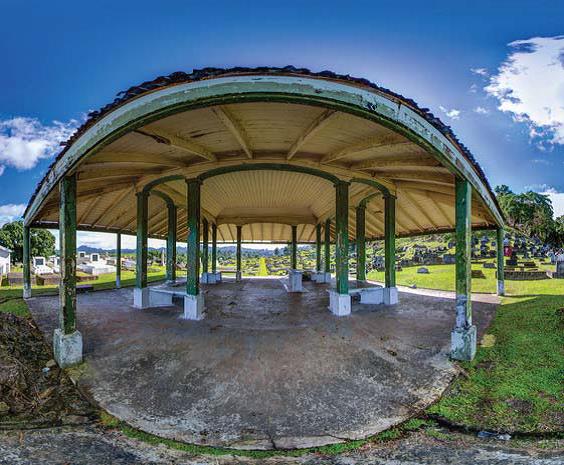 The Suva cemetary is located on the side of the mountain known as Na Ca where more than 400 defenceless Suva women were killed by Rewa allied forces. Picture: FLICKR

THERE are many reasons why a certain tribe came under the rule of another or became a vanua qali.

According to historian and linguist Dr Paul Geraghty as a vanua qali you are subservient and under the rule of another vanua. For example, when Fiji was ceded to Great Britain, we came under the rule of Queen Victoria and her descendants.

There were places that were known to have been colonised such as parts of Koro and Ovalau which are known as qali vakabau – subject to Bau.

To say “o iko na kequ qali (you are my subject) means “au lewai iko” (I own you). Dr Geraghty added the relationship was also the result of defeat in war, or sometime through treachery or trickery.

American Naval Officer Charles Wilkes who led the United States Exploration Expedition to the Pacific, 1838-1842, wrote in 1840 “Levuka is bati to the chiefs of Bau; Fokambou (qali vakabau) and Barita (verata) are qali to the same power, but VakaLevuka is qali to Levuka, whilst the mountainous regions are independent and predatory.

Qali expresses that they are subjects, and compelled to pay tribute yearly, or obliged to satisfy the demands of the chiefs, whenever made upon them.”

Wesleyan missionary Thomas Williams (1815-1891) who developed an interest in anthropology while in Fiji, in his book “Fiji and the Fijians” published in London in 1858 added there are “two kinds of subjection which are recognised and distinguished in Fiji, called Qali and Bati.

Qali represents a province or town that is subject and tributary to a chief town.

Bati denotes those which are not so directly subject: they are less oppressed but less respected, than the Qali.”

When Suva was burned down in 1843 by the Rewa army under the leadership of chief Ro Qaraniqio and the great warrior Camaisala, many believed that Suva had come under the rule or was subject to the Roko Tui Dreketi.

During the war, the Roko Tui Suva Ratu Tabakaucoro aided their safe passage to their safe haven from the now burned down village to their fortress in Uluvatu (Nauluvatu, Reservoir Rd).

However, all access points had been blocked off with the Lomaivuna and Tamavua warriors manning the ridge of what is now Princes Rd down to the Tamavua river, while a Lami warrior Baikeirewa led an army that stood watch around what is the Delainavesi area today.

Ro Qaraniqio and his warriors were on guard along Walu Bay, feasting on the bodies of slain victims at the burned Suva village.

Knowing food supply was running low, Ratu Tabakaucoro made the ultimate decision that they must give in and surrender, and hoping to be granted a safe passage back to where they first settled in Waimanu, Naitasiri before they had moved down to Uluvatu about a century earlier.

“Now when a soro was once made, and the accompanying offering accepted, it was tabu (taboo to break covenant made in connection with, and we may give Camaisala credit for intending to see the Suva people through a remarkably close approach to miracle if over five hundred women, but feebly protected, had been allowed to pass unscathed through the encircling hostile ranks,” Colman writes in his book that was published in 1919.

“They left the cave of refuge, and crossing the fort passed through warriors, sullen with defeat and the coming surrender, and through the western entrance on what is now the Reservoir Rd, and entered the Salata this led South and west of the Reservoir through the grounds known as Vunivuta till above the entrance gates, from where it followed the line of the Coloisuva road.

Less than half a mile from the fort they met hostile chiefs of whom Camaisala was then leader, for Qaraniqio was on his canoe in Walu Bay, and stooping low the mata presented the tooth (tabua), and prayed the conquerors to spare the lives of his clan
and to allow them to pass in safety.

The chiefs who had known of their coming had also decided to accept their soro.”

However, their safety was not guaranteed “a Rewan chief got hold of a Beqa woman who was carrying her child (for which she was wife to a Suva warrior), the woman struggled fiercely to get free, and in his anger the man clubbed and killed her on
the spot; the blow was in all probability unpremeditated, but the tabu was broken.”

“By shouts, the Suva warriors urged the women to rush clear past, while they put up a gallant fight in their defence. For a time it seemed they might succeed, for the attack was evidently not fore planned, and the flight and fight swayed onward, but a little further and the hostile ring closed in, neither courage nor manhood could prevail against such odds, Tabakaucoro with what of his covering party was left, and such women as could keep with them was forced down the steep slope towards the river while Ratu Naileba and his party was screening the women they could and took refuge in the deep gully on the opposite side of the road mostly dry, but which in rain forms the headwaters of Vatuwaqa Creek.”

“But by far the greatest number of the women and children who had escaped death from club or spear in the running fight were round at Na Ca (the evil place), with behind them the steep precipitous cliff which falls sheer down for a hundred feet to the low bank of the Tamavua river; and then followed one of the darkest tragedies in Fiji’s history.

The women stood crowded together on the top of the bluff, and died with stoic fatalism of their race; for a brief time nothing was heard but the thud of the club, or the hiss of the spear as it entered the quivering flesh, and the yells of the paint bedaubed
warriors – and then silence.”

Colman late wrote “be it said that this massacre has no parallel in their history; women were often killed in Fiji as elsewhere in the hot pursuit of a flying enemy, and in the sack of towns, but there is happily no other instance on record of the slaughter
of a crowd of defenceless women after an armistice had been granted.”

It was estimated the number slain from the time the Beqa woman was clubbed until the last victim fell at Na Ca was over 400.

“The slayers were splashed in blood to the “vesa” (ornament), which was bound around the leg below the knee, and in the chase their feet dropped ruddy imprints on the grass, while the food dropped by the fugitives was so bloodstained as to be uneatable;
and Waterhouse in his books written some years afterwards states that even when the spot was marked by scattered human bones.”

Colman added that Ratu Naileba and those that were under his protection escaped to Rewa where they found refuge in Vutia, “the leader may have been vasu to that place, or his followers and their hosts may both have belonged to the greater fisher
clan who always sheltered their brethren in distress, while Tabakaucoro and his party made their to the hill that over-tops the cemetery, so exhausted was he by his efforts in the fight that he was unable to climb the rise and was carried up on the back of a
stout peasant woman named Gaganiwawai.”

“There was one remarkable escape from the slaughter that day that is worth recording, when the Beqa woman was struck down, her little three-year-old son Navosa who she was carrying, sprang from her back and dived into the bush. Here he ran against Sekovi, the old blind matanivanua o Suva and seizing each other’s hand they plunged into the gully on the roadside, opposite the Lunatic Asylum (St Giles Hospital). Here they lay in hiding till nightfall, and when all was quiet Sekovi gave the whistle
call of his clan, and his brother on the hill above hearing it, they were both rescued.”

To this date Suvavou and Rewa mainly villages who make up the district of Rewa are traditional rivals or veitabani.

It all started from Qaraniqio’s attempt to steal Tabakaucoro’s pig. Suvavou is registered under the province of Rewa, but it installs its own chief and is a kingdom on its own.

“7th April 1843. We had a full view of poor Suva this morning, where we once had a few Christians. Yesterday the town was reduced to ashes, and many of its inhabitants killed and eaten by the Rewa people. We saw several canoes which had gone in search of the miserable remnant. The Christian chief is still alive.” Commodore Charles Wilkes the US Exploration Expedition
to the South Seas.