The ‘great minus’ and ‘one plus’ 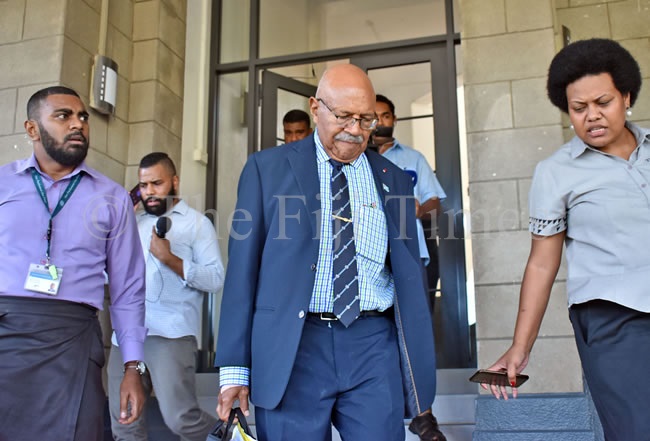 Two months on after the arrival of the COVID-19 in Fiji, there is one encouraging plus but unfortunately far more worrying minuses on the Prime Minister Voreqe Bainimarama Government’s scorecard.

The one plus that sticks out on the global charts is that Fiji authorities seem to have stopped COVID-19 from increasing, while “active cases” are on the decline.

The great minus is Government’s deafening silence on sound community suggestions, both from Opposition parliamentarians and the general public, on how Fiji can cope better with the devastating economic impact of the virus on the weak and vulnerable in Fiji.

Instead, what the public sees are Government sideshows.

The Bainimarama Government seems to be taking the opportunity to weaken legal protection for workers in Fiji through a questionable change of definition of “act of God” to include COVID-19.

What the public sees is that another State institution, the Fiji Elections Office, has taken the totally unnecessary step of suspending the registration of the SODELPA party, meaning a large part of the Opposition cannot participate in Parliament — all for a minor technicality.

What the public sees is a judge ruling that fines  on those who break COVID-19 curfews are not reasonable, and then another higher judge apparently overruling that judgement.

These are terribly worrying indicators that Fiji’s governance has become unaccountable to the Fiji public who pay the salaries of government ministers and public servants like the Supervisor of Elections.

Over the last two months, there have been many constructive suggestions to Government on better economic responses to COVID-19 than those they have implemented,  so that the poor, the vulnerable and those devastated by loss of jobs and incomes can be helped through the crisis.

A former Governor of the Reserve Bank (Savenaca Narube) has very sensibly pleaded with Government to sharply reduce Government expenditure to match the huge decline in government revenues that is now occurring. He even suggested places where this could be done.

Anyone with common sense would know that if Government refuses to reduce its expenditure, then Fiji’s public debt must grow higher and must be paid for in future by all people in Fiji, including the poor.

Any one with common sense would ask, why does this Government ask the poverty-stricken people of Fiji who have lost their jobs and incomes to bear the brunt of the COVID-19 —  but not themselves (ministers and parliamentarians have taken only a 20 per cent reduction) or civil servants (no reduction at all) whose jobs and incomes are guaranteed by taxpayers?

These are the same taxpayers who must pay the increased public debt.

But there is silence from Government.

Mr Narube had also pleaded for a large billion-dollar injection into the economy in line with what has been done by Australia, NZ and UK.

While I have a somewhat different view on the form in which this injection of cash could be done, it was worrying that Government has been totally silent on his suggestion.

Some weeks ago I had pleaded with Government to not allow or encourage FNPF members to draw on their superannuation savings as these were desperately needed for their retirement, especially the low income FNPF contributors. No response from Government.

I had pleaded that it was not good policy to reduce employers’ FNPF contributions by 5 percentage points leading to a massive $130 million loss from workers’ FNPF savings this year (of almost a billion dollars in 30 years’ time).

Opposition MP and leader of NFP (Professor Biman Prasad) had called for Government to put these FNPF savings for Government (and I would add for the private employers as well) into a special fund out of which the poor in the country could be helped.

But not only was there silence from Government on these constructive proposals, but vicious lambasting of Mr Narube and Professor Prasad that their numbers were wrong.

Where is Government’s accountability to the public and to Opposition MPs whose sacred duty it is to hold government to account?

What the public sadly sees is that instead of responding positively and co-operatively to the many constructive suggestions, the Bainimarama Government is taking Fiji society backwards through two opportunistic responses.

Let me take the less important one — the banning from Parliament of MPs from the suspended SODELPA party.

The Supervisor of Elections may be correct in finding irregularities in its administration.

But he could have simply ordered it to fix up the irregularities within the next month, failing which he would take drastic measures against them.

Instead, he suspended SODELPA’s registration, meaning its MPs are suspended from Parliament for two months (and of course go unpaid).

He seems to have forgotten that these suspended MPs represent all the hundreds of thousands of voters who voted for them to be their voice in Parliament, the vast majority of indigenous Fijian voters.

Why ban these voices from Parliament, merely because their party machinery and leadership is in a mess (which they undoubtedly seem to be)?

Why stop these MPs’ salaries while those of the Government Members of Parliament continue unabated?

The “Act of God” debacle

In a God-fearing country like Fiji, any politician with common sense ought to have known not to be so careless with public utterances which seem to attribute the COVID-19 to “God”.

Atheists and agnostics are no doubt laughing over this furore which has erupted in the media from Christians, Hindus and Muslims alike, a religious unity not seen for a long time in Fiji, arising from a statement by a Government which frequently claims to believe in religious tolerance.

But terminology aside, the far more important fact is that the Bainimarama Government is using this COVID-19 as an excuse to bring about changes in employment legislation that are turning back the clock on the protection of weak and vulnerable workers in Fiji, especially women.

To use the COVID-19 to allow employers to break their contracts with their employees by laying them off is surely a totally retrograde step, as this legal protection of workers has been built up after decades of struggles.

Surely, the more sensible approach would have been to put in place schemes such as those in Australia and NZ for the “Job-Keeper” allowance, which of course would not be so generous, but scaled down to Fiji living standards.

Indeed, the public is horrified that its flagship airline, which has just received a massive $450 million sovereign debt guarantee (which one day may have to be met by taxpayers), could not put in place a modest “Job Keeper Allowance” that maintained the employment of all those Fiji Airways workers they brutally laid off , especially the lowly paid flight attendants who are “at the coal face” with the travelling public.

To use COVID-19 to allow employers to reduce the paternity leave and family care leave from the paltry five days previously to two days now, surely puts even more pressure on women by further reducing support from their partners.

I won’t comment on the debacle in the judiciary over the unreasonable fines  for COVID offenders, as a prominent Fiji journalist-lawyer has already done so.

Government MPs do themselves no favour by ridiculing the public voices like former Governor of Reserve Bank Savenaca Narube or Prof of Economics Biman Prasad.

But they will not ridicule this old professor of economics for pointing out that their all- powerful and all-knowing Minister for Economy himself told the media a few days ago (while ridiculing Prof Prasad) that Government revenue will be down by one billion dollars while expenditure will be down by only by $300 million.

A secondary school student can do simple arithmetic and con   clude that if Mr Sayed-Khaiyum’s numbers are correct, then Government deficit will rise by $700m, ultimately increasing public debt by that amount (this old professor of economics suspects that the deficit will rise by even more).

A secondary school student will know that the sensible approach would be for Government to also try to reduce its expenditure by the amount that revenue falls, so that the burden is not all passed on to future generations.

This of course what any sensible household would do if it faced a fall in income: reduce its expenditure accordingly, simply because no bank in the world will generously lend money to the household to keep on merrily spending.

But apparently this government has the legal power do that, all to be paid by the taxpayers (who are fobbed off with freebies now and then).

Any sensible citizen will know that COVID-19 is not due to some malevolent “act of God”, but it is a natural disaster like cyclones or the influenza epidemics arising in numerous countries throughout the world (and not just China) or other diseases harmful to humans.

A decent responsible citizen would know that everyone in our society (including parliamentarians and civil servants, employers and employees, in public and private sectors, and people in formal and informal sectors) must bear the public costs of such natural disasters.

May I suggest that for once, government MPs discuss co-operatively and respectfully, how Government expenditures (including salaries) can be fairly reduced to match the massive reduction in government revenues that is taking place now.

Such a measure will follow the fundamental two principles of equity in taxation: firstly that all families will have at least a bare minimum to live on; and secondly, that those with high incomes will quite fairly contribute a higher amount to government efforts to reduce the budget deficits and public debt.

The second suggestion also follows the “indirect taxation” principle that everyone in the economy should contribute and not just those whose incomes can be taxed by FRCS:  that is, to legislate a temporary COVID-19 surcharge on VAT that will apply right across the country and spread the burden of taxation to all who spend rather than just incomes (which are often skillfully avoided by the canny).

This indirect tax surcharge can be easily lifted when COVID-19 has gone and the economy has recovered.