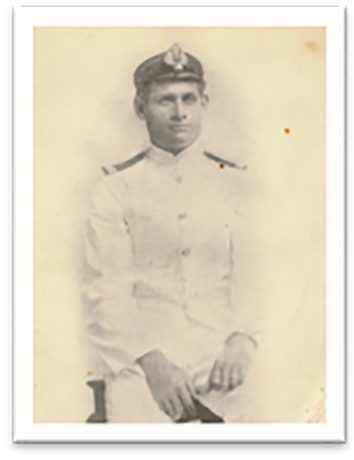 Thomas Richard Senibiau Elliot (of Bridgeton, Glasgow, Scotland; vasu i Nabuna, Koro Island, Lomaiviti, Fiji) was born on July 31, 1891 in Sawau, Rarawai, Ba, Fiji. He died on June 19, 1947 in Suva, Fiji at the age of 55. Thomas was buried at the Suva cemetery. Picture: SUPPLIED

IN this week’s Point of Origin we continue the journey of the Elliot(t) Family in Fiji and visit the history of the children of John Roderick Grant Elliot and Miliana Masutawa.

According to the book, The Elliot(t) Family: From Scotland to Fiji, John Roderick Grant Elliot and Miliana Elliot nee Masutawa had nine children.

We start our story with Thomas Richard Senibiau Elliot of Bridgeton, Glasgow, Scotland who was born on July 31, 1891 in Sawau, Rarawai, Ba.

“His first two children, Isabella and Filomena, were with his first partner, Sege Faitali. He then married Marama Lazarus in Fiji during 1926 and they had three sons: Jack, Jimmy, and Billy. Marama died at the age of 21 on January 12, 1925 in Suva.”

The book stated that Thomas was the chief engineer and manager of the Nasinu stone crusher during the 1940s.

“Thomas then had a child, Nacanieli, with his second partner Siteri Likuivalu, and a child, Sitino, with his third partner Sera. He later married his second wife, Bulou Meresimani Waucu aka Bulou Mary Waucu Udite Jackson aka Mary Jackson on May 28, in 1926 at the Roman Catholic Cathedral, Suva, and they had eight children: Thomas, David, Celia, Judith, Paul, Hubert, Gordon, and Millie Anna.”

The second child was Sili Heffernan Elliott of Bridgeton. He was born on July 21, 1894 in Sawau, Rarawai, Ba.

He died in Auckland, New Zealand. The third child was John Robert Elliott aka Jack who was born in 1899 in Sawau, Rarawai, Ba.

“He died during 1970 at over 70 years of age and was buried in Nasinu 9 Miles cemetery in Nausori.

“Jack’s second marriage was to Rosie Pickering in 1954 in Fiji. Jack later had two children, Robert and Elizabeth, with Maraia Moses in Suva, Fiji.”

Jack died in the 1970s at the age of 73. He was buried at the Nasinu 9 Miles cemetery. Caroline Margarite Elliott, who was the fourth child, was born on August 2, 1900. She was also born in Ba.

James Joseph Elliott was the fifth child born in the Elliot(t) family. He was born on April 21, 1903 and was married to Edith Emma Duthie in Suva, in 1926.

They had three children — Cedric, Edgar, and James.

According to the family’s book, Ms Edith died on May 15, 1952 in Suva at the age of 46. James then remarried to Rosie Rounds.

The sixth child was William Elliott.

William was born in Ba with his other siblings.

He died young. Isabella Elliott was the seventh child who was born on October 13, 1907.

The book stated that she died on June 29, 1908 in Fiji when she was only eight months old.

“They had six children — Felix, Marie, Audrey, Caroline, Hazel, and Seth. Ranchor died on April 27, 1977 in Suva, Fiji at approximately 74 years of age. He was buried in Suva Cemetery.”

The last child was Ellen Naomi Elliott who was born on December 15, 1912 in Ba.

“She had a daughter, Caroline, with William Smith. Ellen married William Smith Powell aka Bill on September 13, 1941 in Kasi, Fiji.

In next week’s, column we will revisit the experience and the journey shared by Paul Hector Elliott, the great-grandson of John
and Miliana Elliot as he sets out on a quest to discover his family origins.