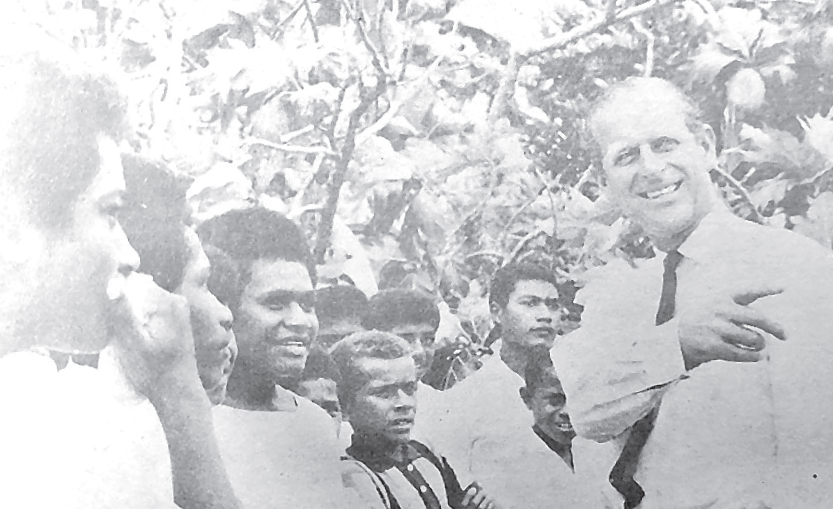 Prince Philip meets the housewives of Tavuki and asked questioned about their cooking and made cracks about household chores. Picture: File

Hurried changes had to be made to the Duke of Edinburgh’s program for the North-West after Cyclone Thelma in 1971 forced the royal yacht Britannia to quickly seek shelter at Vuda Point in the West.

The Duke’s much awaited visit to Yalobi Village in Yasawa was cancelled and his visit was substituted by a simple sight-seeing tour of the Nadi Airport.

As the royal yacht arrived at 7am in Vuda from Lakeba, berthed 50 chains off the jetty, the royal tour committee officials hastily prepared a program for the day for Prince Philip. A The Fiji Times article published on Tuesday, March 9, 1971 reported on the Duke’s program for the day and the quick changes made because of the weather change.

According to the article, on board the royal yacht were the former Prime Minister, Ratu Sir Kamisese Mara and Adi Lady Lala, who then quietly slipped away just half an hour after the Duke left on his sight-seeing tour at the airport.

With light rain and driving wind, dressed casually in white shirt and dark blue leather zip jacket, the Duke stepped ashore at the jetty. He was met by the acting Governor-General, Sir Clifford Hammett and Lady Hammett, the Minister for Local Government and Fijian Affairs and the Vunivalu, Ratu George Cakobau and Adi Lelea. Also present was the British High Commissioner Western, G.M Orr and his wife. As he disembarked off the royal yacht, the Duke was escorted to the Governor-General’s car and driven to Nadi Airport where he was met by the airport manager, P. Thorburn.

The Duke inspected the Nadi Fire Station first and from there was led for morning tea in the airport terminal lounge before he visited the communications and weather office where the chief meteorologist, Arnie Anfinson was presented to him. The Duke was shown weather forecasting equipment.

From there he left the airport for the royal yacht and simply spent the rest of the day resting on board. A cocktail party on board the Britannia was cancelled as the bad weather meant changes to everything even the special parties.

The Britannia was scheduled to sail for Lautoka City that day if the weather was to improve as the Duke was expected to drive to the wharf via Navutu Rd after lunch on board the royal yacht. According to his program he was to present awards to students under the Duke of Edinburgh Award Scheme and was to leave for the new hospital site where he was to unveil a plaque.

The Duke was to then drive through Vitogo Parade, Tavewa Avenue and Thomson Crescent to the hospital.

If the Britannia was still at Vuda by lunch, the Duke was to drive through Drasa Avenue and then along Thomson Crescent which was to be his last official engagement before the Britannia sailed.