The cost of the BOG title 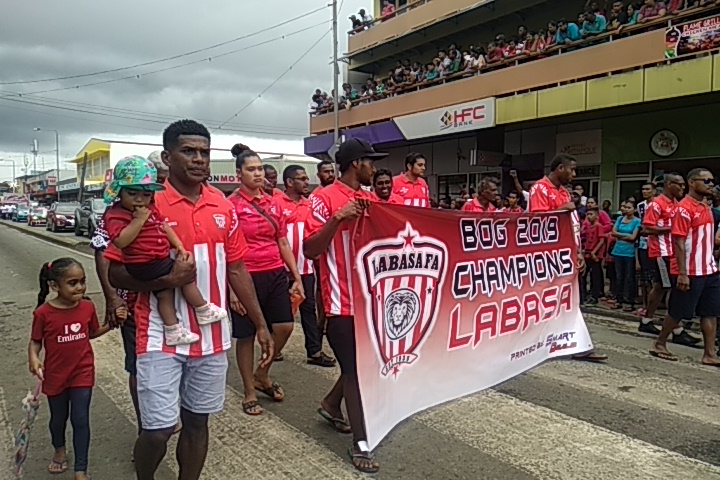 WHEN the Babasiga Lions team roared at Churchill Park as it secured this year’s Inkk Mobile Battle of the Giants tournament, it did so at a cost.

It certainly didn’t come easy for the Labasa football team as their victory was a result of challenges, sacrifices, pain, commitment, struggles and perseverance.

Having toiled on dry local football land for 22 years since it last won the BOG title on home ground in 1997, the Labasa team and officials have only considered themselves blessed.

Certainly, their hard work and overcoming challenges have paid off.

But the season was surrounded with different situations, players and officials faced including sponsorship challenges.

Having to fork out $2000 every week to cater for players’ expenses including their families, team manager Nilesh Lal said it was not easy.

“But our love for Labasa and giving back to our hometown has been the strength of our journey through tough times and good times,” he said.

“And we do know that many others out there share this same love we have for Labasa and joining us to maintain our soccer records would be encouraging.”

The players and officials also lost loved ones weeks before the BOG tournament and lacked financial support but in sharing the common goal to win the title got them through those rough patches.

Labasa’s goalkeeper Akuila Mateisuva injured his big toe forcing doctors to remove the toenail and as a result, wore an enlarged pair of boots to keep his toe safe.

In fact, he limped around the grounds as he gave “his all” to bring back home the BOG cup.

For Sitiveni Rakai, losing his dad weeks before the tournament was also difficult.

But he remained adamant and positive, determined to return home victoriously.

Team president Rayaz Khan also lost his mum but he remained focused, knowing that the boys still needed him for the journey to the BOG tournament.

The preparation period, as team manager Lal described was tough.

“We faced different situations including the deaths of loved ones but we didn’t give up and we certainly didn’t lose hope,” he said.

“Our BOG victory didn’t come easy but we were determined to come back home with the cup for the people of Vanua Levu.

“In fact, the Labasa football team represents the North whenever it goes out there to play in the different tournaments.

“We represent Cakaudrove, Bua and Macuata so having this in mind boosted our performance and we did well.”

Sponsorship challenges, although a real situation for the team, has not deterred officials from meeting huge allowances for players, their monthly housing rental payments and other costs involved.

Paying players on a weekly basis has been a huge task for the officials but as Lal said: “It’s our duty to our players and despite sponsorship problems we have some faithful ones who have stood by the Labasa football team during thick and thin.

“These are the ones who have never backed down and always there when we need assistance.

“Our president, Khan has been faithful as well in supporting our team and this is his second term of being president.

“We can’t seem to let him go because he leads the team well and he is originally from Labasa but now owns an accounting firm in Suva.”

“When we travel to Viti Levu, we spend about $6000 on a trip so these faithful sponsors always steps in to get us through,” he said. “We are forever blessed to have them.”

The Babasiga Lions is one of the favorites in the 2019 IDC battle next month.