The birth and home of the shark god Dakuwaqa

The mouth of the Buca River. Picture: JOHN KAMEA

Beneath Fiji’s pristine ocean and seas, mystically controlled by the spell of the moon, sharks thrive quietly in their wet underworld. By feeding pattern, these predators of the deep occupy the top of the food chain.

But even being at the top of one of the most cherished ecosystems on earth, has not made their existence free from threats.

Humans are usually the ones to blame. We have almost brought our world’s shark population to the brink of mass extinction.

It goes without saying, that the existence of sharks on earth has spawned many benefits to us for countless generations.

In the Pacific, the pelagic fish don’t only reside in the world’s biggest ocean – they help shape it too, influencing its very health and well being.

And apart from these intrinsic values, sharks are also important as sources of meat protein, human livelihoods and tourism, among other things. Furthermore, since time immemorial, sharks have influenced the folk tales of thousands of indigenous Fijians and assured the continued reign of Dakuwaqa, the ancient shark god, as the supreme protector of the province of Cakaudrove and its paramount chief, the Tui Cakau.

Among the many deities once worshipped in old and polytheistic Fiji, none was more feared than Dakuwaqa.

He was a helper during sea disasters. He was also a killer. Today, many parts of Fiji claim to have remnants of his former home and that he once lived among them.

The village of Rukua in Beqa for instance has a cave where Dakuwaqa once lived with his two daughters.

One day, Cakaubalavu and his men went on a fishing trip.

As was the tradition then, a special dish of qalu (a dessert made from grated root crops and coconut milk syrup) was prepared and wrapped in banana leaves for them.

However, upon their return, Cakaubalavu and his fellow fishermen learned that the qalu that was reserved for them had been eaten up.

Cakaubalavu went into a fit of rage and dived into the sea. He overturned three times before transforming into a shark.

Resentful of how he was treated with disrespect, Cakaubalavu vowed to leave Beqa together with his fellow traditional fishermen in search of another land. He finally reached Taveuni.

In the village of Buca, Natewa in the province of Cakaudrove, age-old stories of how Dakuwaqa was born in Natewa territory are still alive amongst the conversations and storytelling of the elderly.

The bump on the stony surface shows the remains of the first Buca Village bridge that was built next to Dakuwaqa’s cave. It was destroyed by floodwaters. Picture: JOHN KAMEA

“Without our history and our traditional stories, we lose our uniqueness in the world,” he said.

Mr Nabukavou, a former village headman and district school manager, and the current chairman of Buca’s development committee said his story of Dakuwaqa had been passed down by his ancestors for countless generations. To put things in context, he started by sharing a brief history of his people.

“Based on what I’ve been told, we are the bati leka of the Vunivalu of Natewa. We were originally in Natewa, at a place called Kama,” Mr Nabukavou said.

The bati leka were those warriors positioned close to a chief’s domain. They were his closest protectors and last line of defence.

The bati balavu, on the other hand, were frontier warriors and acted as the first line of defence for a chief and his domain. They usually
occupied strategic points on land borders.

“During the days of tribal wars, the Vunivalu sent Tui Kama and members of his powerful yavusa and another yavusa within the vanua of Sovatabua called Navai (Tukavesi), whose people occupied Natewa’s highlands (lekutu), to establish themselves along the coast at Buca Bay.”

This migration was both a political decision and a military strategy.

Living on the coast gave the two warrior tribes a unique vantage point.

At Buca Bay they were able to launch military attacks on invading armies from Somosomo and warn their paramount chief in Natewa Bay of any impending invasion.

When the Vunivalu made an important decision, information was relayed on foot by a messenger(s) who would run over mountain ridges and cross thick jungle to reach Buca Bay.

It was through the legendary warriors from yavusa Kama and Navai that Natewa emerged as a powerful and independent matanitu vanua.

Hence, when the people of Natewa go to Somosomo they do not strictly observe the restrictions obeyed by the people from other tikina or districts. Also, Somosomo would not delegate anything to Natewa.

“Dakuwaqa lived among humans in the olden days. He had a cave up the Buca River, not too far away from the village bridge,” Mr Nabukavou continued.

“I was told he was born further upstream, at the branch of the river which flows down to Tukavesi.”

Like other gods of old Fiji, Dakuwaqa was a shapeshifter. He could take up any form, from a man or shark to a piece of log or stone. This made him invincible.

Below this rocky place is where Dakuwaqa’s underwater cave is located. Picture: JOHN KAMEA

Legend has it that his mum suffered a terrible miscarriage, probably due to the extreme cold she caught while catching fish in the river near Navai. Her foetus floated downstream to Buca.

Unlike human miscarriages, the unborn foetus of Dakuwaqa cheated death and it grew
into an adult.

On its way out to sea, Dakuwaqa’s foetus attached to a floating log of the evergreen buabua which drifted down the Buca River.

It finally reached nearby Kioa Island and beached on the beautiful sands of Dromoninuku.

During this time, the warriors from Somosomo were a formidable army. They waged war against many tribes on Vanua Levu and other parts of Fiji.

One day, one their way to attack Natewa, warriors from Taveuni stopped at Kioa and made use of the good weather by spending time on its sparkling beach.

When they fi nally decided to leave, the tide was out so they picked up a buabua log on the beach and used it as boat rollers to launch their canoes back to sea.

Little did they know Dakuwaqa was alive inside the buabua. When the buabua trunk touched the water, it quickly changed into a shark today called Dakuwaqa.

He swam and warned the people of Buca about the army from Somosomo. As a result, the island visitors got a bruising defeat from the Vunivalu of Natewa’s warriors. He also made Buca his permanent home.

Hence, the word Dakuwaqa comes from two words meaning back (daku) and boat or canoe (waqa), inferring that on the back of the buabua tree, the men from Somosomo were able to launch their canoes.

Today, stones in the portion of the river that flows past neighbouring Tukavesi Village (Navai), are coloured red to mark where Dakuwaqa’ was “born”.

“Buca Village is fortunate because we have a landmark such as Dakuwaqa’s underwater cave which forms part of our identity and legend,” Mr Nabukavou said.

The cave is called Qarani’anaca by locals. It leads into a deep water-filled tunnel which ends up in a dry place a few metres from the mouth.

“Our ancestors used to say some of them used to find body parts like the remains of arms, legs and heads in the cave. These were leftovers from Dakuwaqa’s meals.”

Those who ended up being his victims were largely those who committed offences against the vanua or had done things not according to traditional protocols. Death also meant Dakuwaqa was not happy.

During the presentation of The Sunday Times team’s sevusevu to the Turaga na Tui Kama, he said he had seen human remains left by Dakuwaqa when he was a small boy growing up in the village.

He said when Dakuwaqa ate human flesh he would enter into a human body and deliver a warning message to villagers.

“Once, a person whom Dakuwaqa had possessed spoke out. He reeked of liquor showing that Dakuwaqa had been drinking before entering the villager’s body.” Mr Nabukavou quoted Ratu Seru as saying.

From the early days to the colonial era, Qarani’anaca was a revered place.

Children would never go near it for fear of meeting an angry fresh-eating Dakuwaqa. Stories of the kalou vu made children shiver with fright.

“In our days, women would fi sh in waters near the cave but we always had respect for it,” reminisced Mereani Nawaikula, a 90-year-old mother of Opposition MP, Niko Nawaikula.

“The place had a lot of fish so we’d always go home with a good catch. Some who tried diving in the cave said it was very deep and dark.”

Another record of Dakuwaqa’s birth and life exists in a village meke whose lyrics villagers have been chanting for generations.

“That meke about Dakuwaqa is only performed during very special occasions. While we still use the original lyrics, we have lost the actions that accompany the chants (mata ni meke),” Mr Nabukavou said.

One verse of the meke, according to Nabukavou, goes: “Qori a meke ‘ei Da’uwaqa (This meke tells the story of Dakuwaqa); Sucu dina ga va’atamata (Indeed, he was born a human)/Ma ciri sobu i waitui lala (He drifted out to the open sea)/ E Dromoninu’u me lai ta’asa (And finally beached at Dromoninuku).”

Today, due to the advent of Christianity and the disappearance of ancestral worship, Dakuwaqa and his food residues can no longer be seen any more in his cave.

The site of Dakuwaqa’s cave was where Buca’s first bridge was built. That bridge was destroyed by floods. Many believe, Kuku, the name meaning grandfather which villagers fondly use when referring to Dakuwaqa, did not want the bridge build next to his cave.

The only visible thing that remains at the site is a tilted stone chair where he used to sit when he emerged from his cave down below. 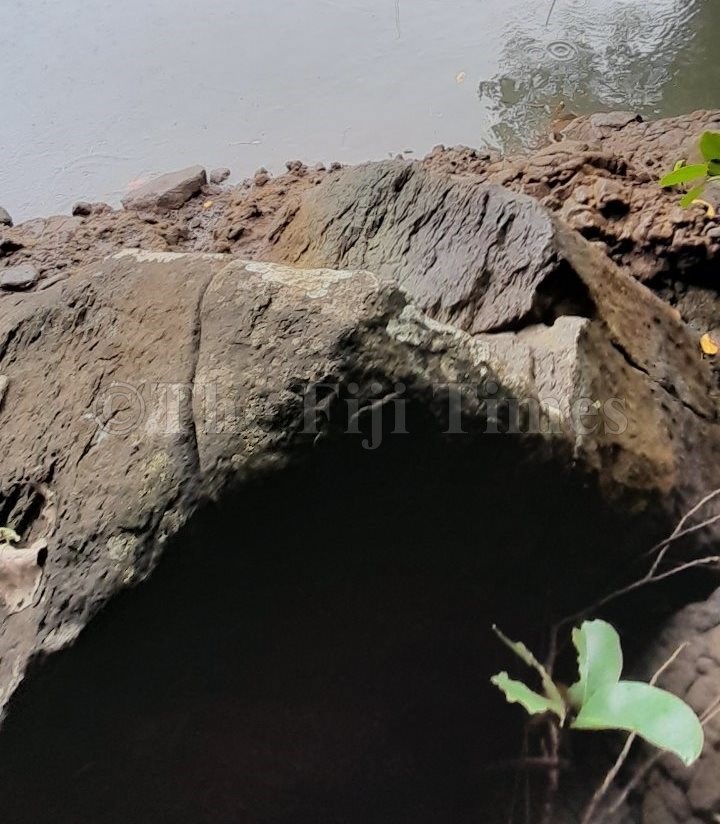 This rock is the tilted stone chair that Dakuwaqa used to sit on when he emerged from his cave. Picture: JOHN KAMEA

The stone grotto has been through many cyclones and fl oods, causing heavy silting and the gradual shallowing of the once-venerated Qarani’anaca.

But the amazing story of the shark god Dakuwaqa will remain for some time in the stories and meke of the people of Buca for many generations to come.

Love him or hate him, Dakuwaqa, or at least his legend, is here to stay!