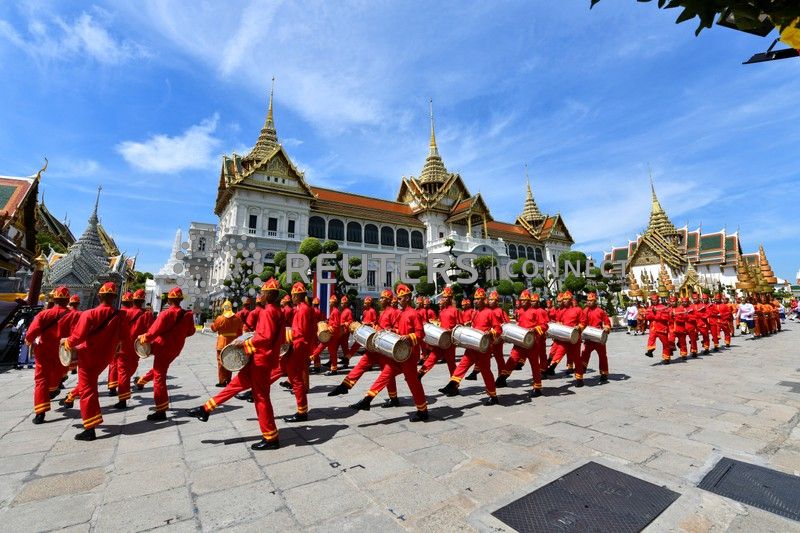 Thai soldiers dressed in traditional costumes transfer The Royal Golden Plaque of the official title of His Majesty the King, the Royal Golden Plaque of His Majesty's horoscope, and the Royal Seal of State from the Temple of the Emerald Buddha to Baisal Daksin Throne Hall at the Grand Palace in Bangkok, Thailand, May 3, 2019. The Committee on Public Relations of the Coronation of King Rama X/Handout via REUTERS

BANGKOK (Reuters) – Thailand’s King Maha Vajiralongkorn conducted final rituals on Friday in preparation for three days of ceremonies for his elaborate coronation, which will also be marked by the pardoning and release from jail of some prisoners.

The coronation, which takes place from Saturday to Monday, will be the first the country has seen in 69 years, since his father, the late King Bhumibol Adulyadej, was crowned in 1950.

King Vajiralongkorn, 66, is also known by the title of King Rama X. He became a constitutional monarch after the death of his revered father in October 2016, after 70 years on the throne.

On Friday, the king visited the Temple of the Emerald Buddha to pay respects to one of Thailand’s most sacred Buddhist relics.

“Long live the king,” chanted a group of people dressed in yellow, an auspicious colour in Thailand, as the king and his new queen walked on a red carpet to the Grand Palace, shielded from the hot afternoon sun by a big yellow umbrella.

The king lit auspicious candles at 4:19 p.m. (9:19 GMT), a time that court astrologers determined was propitious, as 80 Buddhist monks chanted.

Yellow is particularly significant as it is the colour of Monday In Thai culture, which is steeped in astrology, the day the king was born, and also the colour of the sun, which represents the monarch in the cosmos.

Thais have been urged to wear yellow until the end of July, the king’s birth month.

Earlier on Friday, a senior palace official transferred a golden plaque inscribed with the king’s official name and title, his horoscope and the royal seal from the Temple of the Emerald Buddha to the Grand Palace in preparation for Saturday’s events.

The three items, which were made in a three-hour ritual last week, will be presented to the king by the chief Brahmin, along with five royal regalia, the symbols of kingship in Thailand.

Ahead of the grand ceremonies, the king said he would grant royal pardons to some prisoners to “give them a chance to become good citizens”, according to the Royal Gazette.

The order, which will take effect on Saturday, listed many criteria of prisoners eligible for the pardon, including those with disabilities, chronic or terminal diseases, or those within a year of completing their sentence.

The king will also reduce sentences for some prisoners, including those imprisoned for life, and commute some death sentences to life.

It is not clear how many people will qualify for pardons, and the Department of Corrections said it would finalise a list of eligible prisoners, and release them or commute their sentences, within 120 days.

The order did not exclude foreigners, nor did it exclude prisoners convicted of insulting the monarchy, a crime known as lese-majeste, which is punishable by up to 15 years in prison.

Jatupat Boonpattararaksa, a prominent student activist who was sentenced in 2017 to two and a half years in jail for sharing a Thai-language BBC profile of the king is expected to be released next week, his lawyer told Reuters.

Jatupat was the first person to be charged with royal insult after the king formally ascended the throne following the death of King Bhumibol.

His full jail term will be completed on June 19.