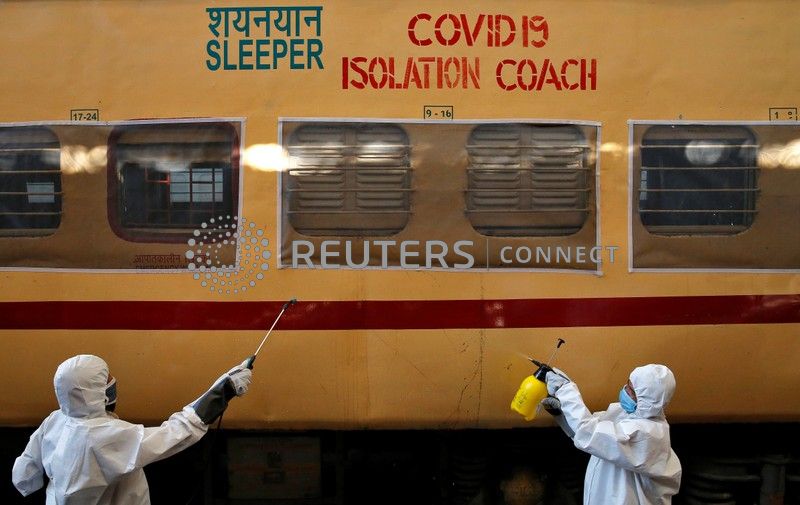 Workers wearing protective suits disinfect the exterior of a passenger train after it was converted into an isolation facility amid concerns about the spread of coronavirus disease (COVID-19), on the outskirts of Kolkata, India, April 6, 2020. REUTERS/Rupak De Chowdhuri

NEW DELHI (Reuters) – India, like a lot of countries plunged into crisis by the pandemic, is struggling to ramp up testing for the coronavirus, but in few places would the odds of containing the disease appear so bleak should domestic transmission start to multiply.

Officials hope to be testing 20,000 people daily by the end of the week, twice the current rate.

Since India’s first case was confirmed on Jan. 30, India has conducted only a little over 96,000 tests, having focused efforts on identifying those who had come in contact with people who have tested positive.

The results show 4,067 people are infected, and 107 have died of the respiratory disease.

Officials believe a three-week nationwide lockdown ordered by Prime Minister Narendra Modi will have slowed the spread of the virus in communities, giving them a chance to catch up in the race to stop a full blown epidemic.

Lav Agarwal, joint secretary in the Indian health ministry leading the effort to tackle the spread of infections, said the country was increasing its testing capacity gradually.

“We should be not be panicking, we should be preparing,” Agarwal said.

“We have followed a pro-active policy from the beginning. Our focus has been on surveillance and contact tracing. Instead of the virus chasing us, we have been chasing the virus.”

Testing had already doubled in the last two days from 5,000 samples a day, another health official said. “This is expected to reach 20,000 in the next three days and increase further over the next few weeks as per the plan,” the official said.

Further out, the country was planning to scale up to 100,000 tests a day in the “worst-case scenario”, the Indian Council of Medical Research, the government arm regulating the testing, said in a statement.

Worldwide, more than 1.25 million people have been reported infected by COVID-19, and far wealthier countries than India have been fiercely criticised for their slow initial response, particularly regarding testing.

In India, with 1.3 billion people, hundreds of millions of poor, living in unhygienic and crammed-in conditions, there is a very real fear that if the testing starts too far behind the curve, the confirmed cases won’t even account for the tip of the tip of the iceberg.

“There is unanimity among epidemiologists, doctors and district-level administrators that the need of the hour is aggressive and extensive testing,” said former finance minister P. Chidambaram and a leader of the opposition Congress party.

Yet, doctors say the campaign for mass screening is handicapped by a lack of both testing kits and protective gear for staff carrying out the tests.

Elsewhere in South Asia, the medical infrastructure can be even more inadequate, and authorities are playing catch up as testing kits become available to them.

Bangladesh and Nepal moved on Monday to further restrict people’s movements in the hope of containing the virus.

Nepal’s Finance Minister Finance Minister Yuba Raj Khatiwada said a two-week lockdown that was due to end on Tuesday will be extended by another week. Bangladesh, struggling to get its people to abide by a similar shutdown, suspended prayers at mosques to stop worshippers from stepping out of their homes.

Afghanistan has had 367 cases from the 2,737 people it has tested. The western border province of Herat has suffered the worst outbreak, as thousands of Afghans returned in recent weeks from Iran, where the virus has hit hard.

Officials say there has been basic screening such as temperature checks but only a fraction of those crossing the border from Iran have been tested.

In Bangladesh, with a population of 160 million, the government has faced criticism also over a lack of testing.

Pakistan’s health ministry said it had conducted 35,875 tests so far, based on a policy of testing only those people with a suspect travel history, direct exposure to someone who has tested positive or showing acute symptoms with an underlying history of health problems.

Following are government figures on the spread of the coronavirus in South Asia:

* Afghanistan has 367 cases, including 7 deaths

* Bangladesh has 123 cases, including 12 deaths

* Maldives has 19 cases and no deaths

* Nepal has nine cases and no deaths

* Bhutan has five cases and no deaths