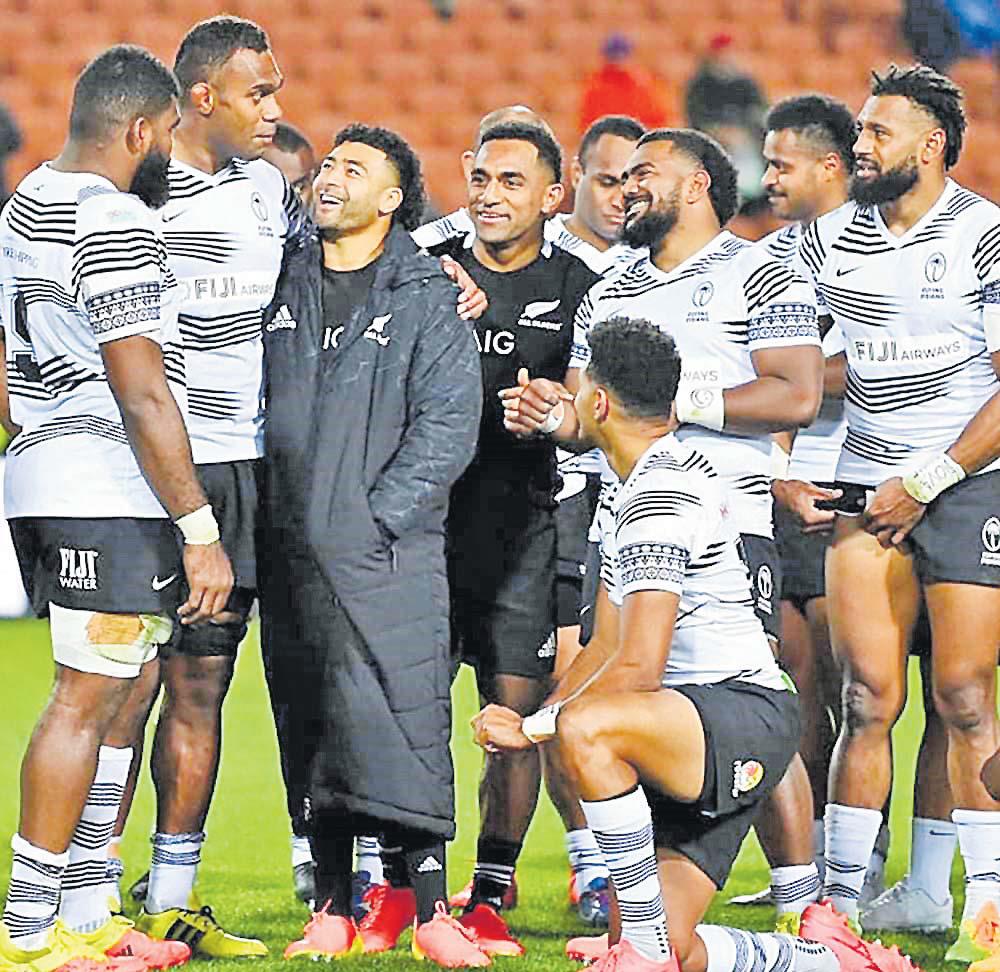 Members of the Flying Fijians team with All Blacks’ Richie Mo’unga and Sevu Reece during the June Test window. Picture: FRU/TWITTER

Flying Fijians head coach Vern Cotter is not happy with the results of his team’s performance in the Autumn Tour.

Now with the completion of the tour, Cotter said they could have done much better with good results.

“The context of preparing three Test matches was complicated, but there was a lot of exchanges down the first two games which were easy to prepare,” he said.

“The team got together and played Spain in a slow first-half then better in the second-half.

“Wales was going to be the game to excite everybody. It is the same team in the Rugby World Cup pool in two year’s time and it was a great place to play in Cardiff, so getting out on that was easy.

“We led and I thought we could have won the game.

“Obviously when we looked at the big things, the red card and then the two yellow cards hurt us. Then the second yellow card, in particular within 10 minutes to go. Then the key for the coaching group was to get the team back up in a six-day turnaround and travel back to Madrid and play against Georgia.

“Now that was when the character had to dig in. We had to be well prepared and I think probably that would not be of the three games.”

The Flying Fijians won their first game 43-13 against Spain, lost to Wales 23-38 and played to a 15-all draw against Georgia.

Cotter said the key theme coming out of the Wales match was discipline.

“We had limited access to that last week which was frustrating, but understandable because there were the people on the ground. Their behaviour and attitudes that was hard for us, so it was up to that coaching crew to take the team. Georgia gave us what we expected, but we gave them what they wanted. We knew they gave us the double push scrum, so we lifted early, same thing happened in the All Blacks Tests.

“It is such a reoccurring thing that needs to be addressed.

“We seemed to have trouble coming from a big game into another game.

“We have troubling backing up our performances whether it is in the Rugby World Cup two years ago or this game or even the All Blacks Test series.

“We were not performing as well in the first game.

“Now we need to get our attitude and mindset sorted out. The players need to know they got to back their performance up.

“You can’t have one good game and expected to get a pat on the back and that’s enough.

“We got to be able to knuckle down, show character and understand that if we give teams access to the games, they will take advantage of us which happened with Georgia.

“Georgia has a strong scrum, I thought the lineout against Wales was 71 per cent. There were a couple of issues that we need to sort out.

“We got what we expected from Georgia, strong set piece, double push scrum and we gave the penalties. They didn’t score a try, they were never threatening with the ball.

“They were just given easy option and easy three points through our mistakes.”