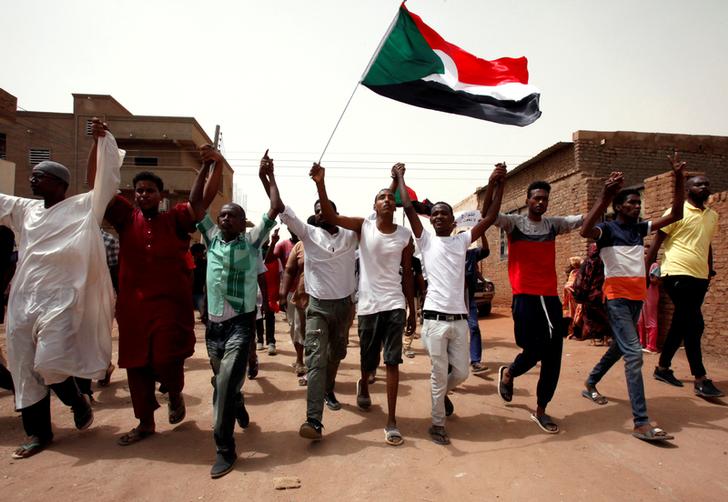 Sudanese people carry their national flag as they march on the streets demanding the ruling military hand over to civilians during a demonstration in Khartoum North, Sudan June 30, 2019. REUTERS/Mohamed Nureldin Abdallah

KHARTOUM (Reuters) – Huge crowds marched on Sudan’s defense ministry on Sunday demanding the ruling military hand over power to civilians, and the authorities said at least seven people were killed and scores injured in protests nationwide.

In the biggest demonstrations since a deadly raid by security forces on a protest camp in central Khartoum three weeks ago, tens of thousands of residents took to the streets in several parts of the Sudanese capital.

In two areas near the presidential palace and in the upscale eastern neighborhood of Riyadh, they were met by security forces firing barrages of tear gas, witnesses said.

Seven people were killed and 181 wounded, 27 of them by live fire, in protests nationwide, the state news agency reported, citing a Health Ministry undersecretary.

The official said 10 of those injured were members of regular forces, including three conscripts of the Rapid Support Forces (RSF), led by Hemedti, who were injured by gunfire. The remaining seven were injured by stones hurled by demonstrators, he added.

A doctor’s group linked to the opposition said at least five protesters were killed and dozens injured during demonstrations in several cities. Reuters could not verify those accounts.

Sudan’s military overthrew president Omar al-Bashir in April after months of demonstrations against his rule.

Opposition groups kept up those demonstrations as they pressed the military to hand over power to civilians. But talks broke down after members of the security services raided the sit-in protest camp outside the defense ministry on June 3.

The Forces for Freedom and Change (FFC) opposition coalition called for a million people to demonstrate on Sunday – the 30th anniversary of the coup that brought Bashir to power, and the African Union’s deadline for Sudan’s military rulers to hand over to civilians or face further sanctions.