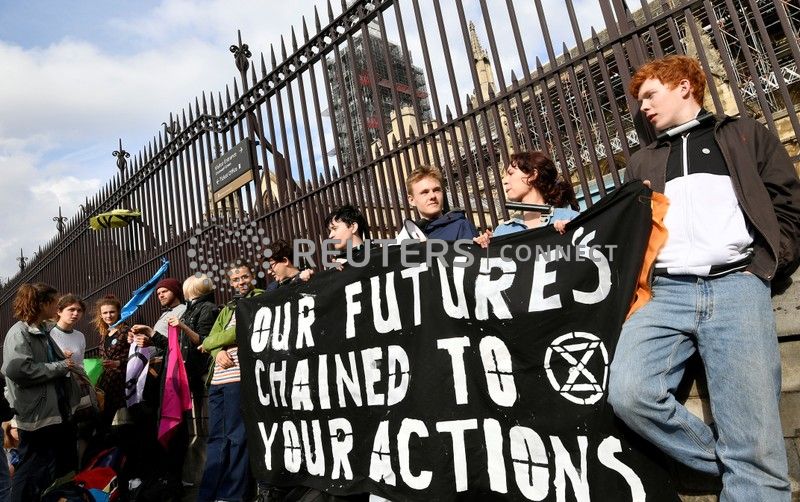 Climate change activists lock themselves at the gate of the Houses of Parliament during an Extinction Rebellion protest in London, Britain May 3, 2019. REUTERS/Toby Melville

LONDON (Reuters) – Teenage environmental activists locked themselves to the railings of Britain’s parliament on Friday to demand politicians take more radical measures to fight climate change after weeks of protests pushed the issue up the political agenda.

Twelve teenagers, who are members of the youth wing of the Extinction Rebellion group, used bike locks to chain themselves by the neck to parliament’s perimeter.

“We want to send a message that we will not stop fighting until we see change and action,” said Talia Woodin, 18, a first-year anthropology student at the University of London.

In front of her, a large banner read: “Our future’s chained to your actions.”

Extinction Rebellion orchestrated the biggest civil disobedience protests in Britain in decades last month by blocking some of London’s most iconic locations, stopping trains, and defacing the Shell building.

The group advocates non-violent civil disobedience in an attempt to force governments to reduce carbon emissions and avert what it says is a global climate crisis that will bring starvation, floods, wildfires and social collapse.