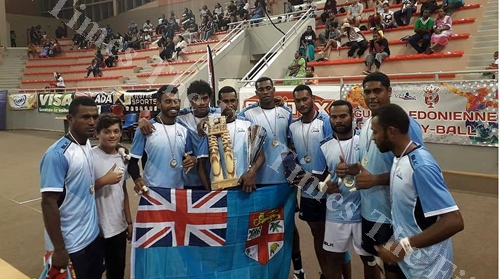 THE Fiji men’s volleyball team is focusing on its fitness ahead of the Samoa Pacific Games in July.

Men’s team head coach Peni Ratumaiyale believes fitness within the team will take the team a long way in grabbing a gold medal at the Pacific Games.

“Right now we are focusing on fitness before we can move on to court work as they need a lot of fitness in order to win championships,” Ratumaiyale said.

“We want the players to maintain their fitness throughout this training season and even when we jump to court work we are still going to include fitness because that is the only way we can get to achieve our goal for the year,” said Ratumaiyale.

The hopes are high for the team after winning the Oceania Volleyball Championship last year beating New-Zealand 3-1.

“The main aim here is to win gold and since we won the Oceania tournament last year the players know what it is like to win a big championship so we have that winning attitude.

“The players are very competitive even among themselves because we all want to get that gold at the end of the day so the hopes are high which has created a boost to our training,” said Ratumaiyale.

“We believe we are on track despite obstacles in terms of fixing training venues and training times but the players all have one goal and we are focusing well,” he added.

“We have a lot of new players in the team and a few experienced ones, and this is because we would like to get the young ones exposed and they had also proved themselves during training and trials.

“This is a team sport and we encourage more bonding with the old and the new players and we can see that it is going well,” he said.