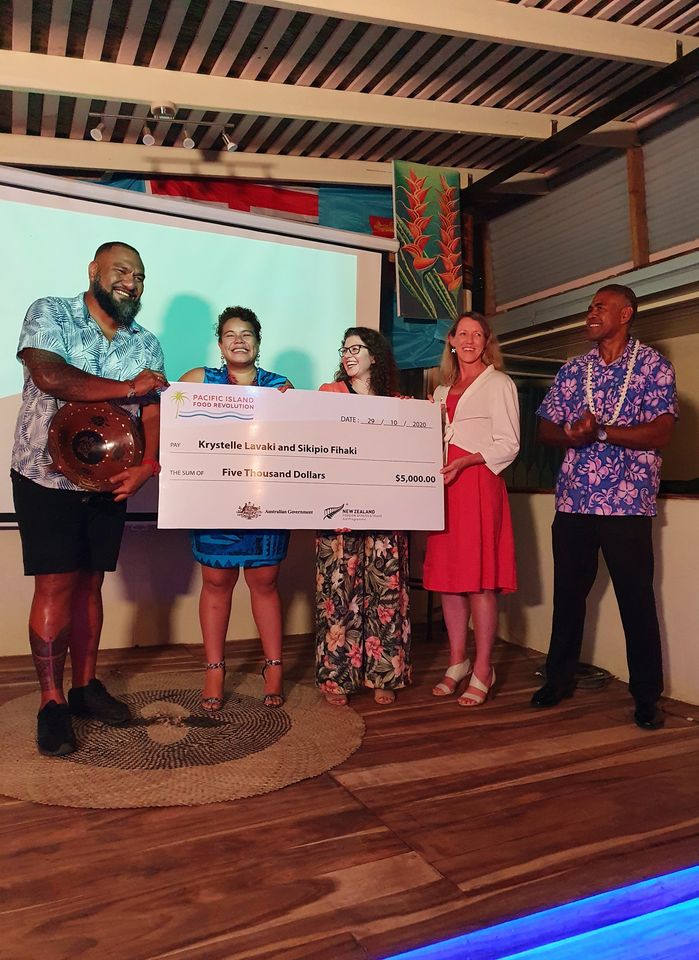 Sikipio Fihaki (far left) and Krystelle Lavaki (second from the left) are all smiles after receiving their spoils from the representatives from the Governments of Australia and New Zealand and Dr Jone Hawea (far right) at Café 30 in Suva. Picture: SUPPLIED/THOMAS JOHANSEN

Team Tonga was the runner-up for this year’s competition.

In an interview with Fiji Times Online, Ms Lavaki who was still coming to terms with the amazing win said the Pacific Island Food Revolution journey was something that she would never fully explain.

“It has been a spiritual experience, to be honest,” Ms Lavaki said.

She said they were overwhelmed and thrilled, especially being part of a big family of food warriors from the Pacific that came together and showed the world their ethics and what family means to them and of course definitely food.

“We decided to do this on a really random night when we were having a few beers and we were talking about the show.

“Initially we were just going to go and see what we can do.”

Ms Lavaki said the journey in itself taught both Sikipio and herself so many things about their own food and culture.

“It reignited our own individual passion towards our traditional food.

“Pio is Tongan and Samoan as well so, we paid homage to that side of his family and I have part Indian blood so aside from being a full-blooded Lauan Kailoma, we were so blessed to have that kind of background.

“So the journey just emphasised what kind of cultural heritage we had in cooking.”

When asked how they were going to spend the $5000 prize money, Ms Lavaki said: “It is going to develop the business that we already have and just push that same vision moving forward.”

Niu Grillz, located at the Fiji Club, specialises in smoked and grilled meats, with added Pacific flavour – a Niu take on food.

The Pacific Island Food Revolution is jointly funded by the governments of Australia and New Zealand.