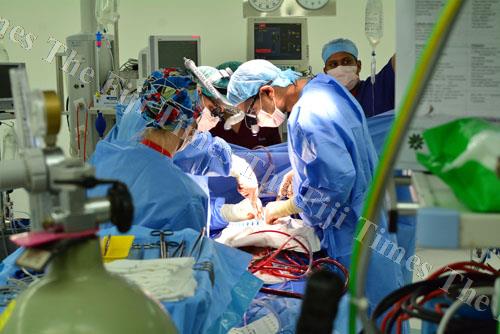 TWENTY-four rheumatic heart disease (RHD) valve surgeries were conducted by a visiting team of surgeons yesterday at the Colonial War Memorial Hospital in Suva on Tuesday.

The surgeries were conducted by more than 80 specialists brought in by the Friends of Fiji Heart Foundation (FOFHF) over a six-day period.

Lead cardiac surgeon from the Auckland City Hospital and founder for the foundation Dr Parma Nand said the surgeries included replacing valves with mechanical, metal and some tissue valves.

Dr Nand said patients were from all over Fiji and Tuesday was the final day for surgeries.

He said RHD was a condition present mostly between the ages of five to 15 years of age.

“As the years go by, the heart valves are affected by rheumatic fever. The disease is a progressive disease. Once it starts, it progresses over decades until about 45 years of age,” he said.

“We are trying to get these young patients between the ages of 13 to 15 years of age. We try to select younger patients compared with older ones — as patients get older, the surgery gets more complicated.”

He added Fiji was one of the places where the incidence of RHD was very high compared with other Pacific islands nations.

“I think it is probably because the awareness about RHD is higher and Fiji has a bigger population compared with rest of the region,” he said.

“There is a slightly more robust screening process here in the country and so with this obviously you will have more patients with RHD.”

When it came to post-operation care, he said the team would only leave when all the patients had been discharged with local doctors being familiar with the post-operation follow-ups.

FOFHF has been visiting Fiji since 2006 and this is its 13th successful mission to the country.