TD13F expected to develop into cyclone 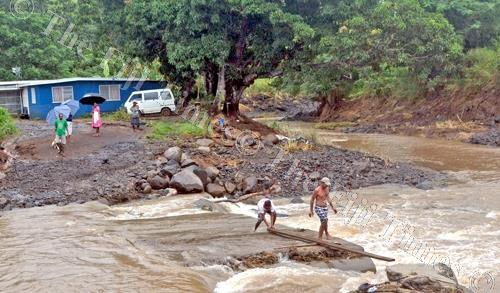 Residents try to make a temporary crossing at a bridge near Kalacraft in Lautoka. Picture: ALVEEN KUMAR

IN its current path, Tropical Depression 13F, which is expected to develop into a tropical cyclone in the next 72 hours as it approaches Fiji, is expected to pass the Northern Division by Wednesday this week.

Mr Vocea said flooding in low-lying areas was imminent if this was the case.

“We are calling on members of the public to move to higher ground or their nearest evacuation centre if they find the need to,” he said.

“People can also call emergency numbers; 917, 919 or 911 if they need help to evacuate their families safely,” he said.

“They will also be operating evacuation in areas threatened by floodwaters so members of the public are urged to co-operate with them.”

Mr Vocea said the Northern Emergency Operations Centre had begun its eight-hour shifts on Saturday night, adding that personnel from various departments had now been rostered into these shifts.

“The situation in the North may worsen by tonight (last night) or tomorrow (today) and members of the public are advised to undertake the necessary precautions,” he said.