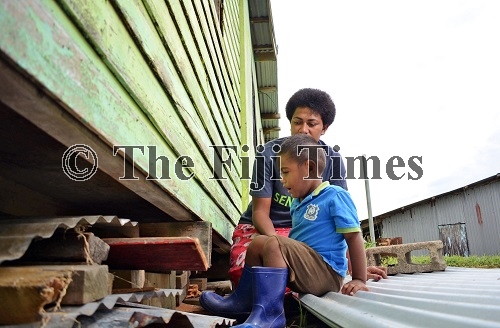 Nabukelevu -i-Ra villager Alena Aditaua sits next to the space underneath their home flooring where she had to take cover with seven others when the category four TC Harold hit their village in Kadavu last month. She is joined by her son Nacani Veitamani. Picture: JOVESA NAISUA

While Alena Aditaua huddled under the floor of her house with eight others as Tropical Cyclone Harold tore through Kadavu on April 8, the only thought in her mind was the safety of her son.

More than a month after the Category 4 storm tore through Nabukelevu-i-ra Village, she still has nightmares about TC Harold’s wrath and what could have been.

The 28-year-old said when their house was blown apart, she was separated from her son and he had been taken to safety by another family and had sheltered at their home.

Ms Aditaua said she thought she would lose her son because of the intensity of the monster cyclone.

“TC Winston was nothing compared to Harold,” she said.

“Roofing iron were torn like paper from homes and were flying around the village and the only thing I could think of was my son and how I couldn’t hold him and reassure him,” she said.

“I prayed to God for his protection over my son because I was worried about what could happen to him.”

She said as the winds continued to pick up and they huddled in the wet mud, fearing for their lives, she shed tears for her son.

“I kept imagining that those sheltering with him might leave him behind if they had to seek shelter elsewhere, I was so worried.

“So many times, I was desperate to go and see if he was OK but I knew God would protect him.”

Fiji’s reopening of schools will be after consultation with stakeholders