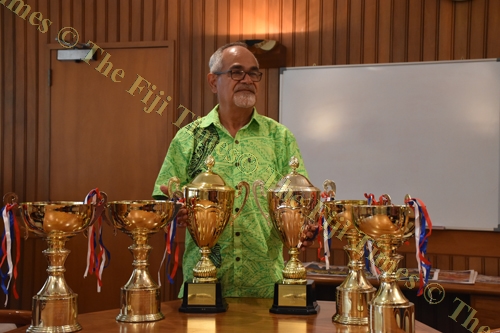 Patrick Bower with new trophies that will be contested in next month's FMF Chow Games at the ANZ Stadium in Suva. Picture: SUPPLIED

THE Northern district will not be part of this year’s FMF Chow Games National Finals and will have their own meet at the Wairiki Secondary School in Taveuni on Vanua Levu.

Association general secretary Patrick Bower said the national games was a few days after election day, which would make it difficult for the athletes and officials from the North to travel down.

“The elections day is actually two days prior to the meet, which will be inconvenient for the athletes and officials to travel down,” Bower said.

“Most of the officials will actually be officiating on election day as officers so we have been realistic about our decisions and we believe it is easier for them to just have their own meet.”

Bower said the Northern finals will be held in Taveuni due to ground availability.

“We have decided to move the games to Taveuni simply because there is no ground available in Savusavu or Labasa.

“So the games will be held at Wairiki Secondary School so the Northern Division will have their own little meet.

“We are disappointed that we have had to come to this decision but we had to be more realistic about the situation and at the end of the day, it all comes down to the children’s safety.”