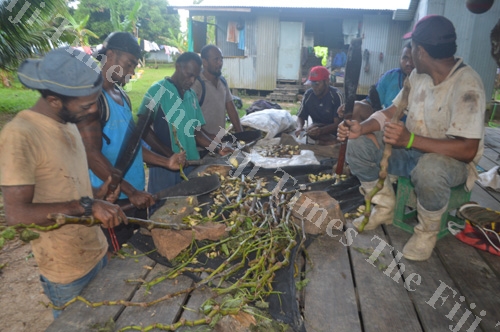 FARMERS on Taveuni are calling for a national ban on the sale of green yaqona to discourage the increasing cases of yaqona theft on the island.

After a meeting with the district officer on the island and police, farmers have raised concerns on the increase in yaqona theft on the island.

Qila farmers representative Nitesh Swamy claimed cases of theft had been further aggravated by the green yaqona trade which was an easy money maker for thieves.

Mr Swamy said most of those stealing the plants were opportunists who were simply taking advantage of the green yaqona trade.

“Once we ban this green yaqona trade, we will put an end to the theft of yaqona plants,” he said.

Another Qila farmer Salesh Prasad said farmers lost thousands in monetary terms when their plants were stolen, adding thieves were targeting young plants because it was easy to uproot.

“It is sad that nothing has been done to address this issue which has been an old one because yaqona is raking in money and improving the standard of living for farmers in these rural areas,” he said.

“This is why we are calling for a national ban so that green yaqona plants are not sold anymore, stopping the need to steal them.”

Meanwhile, Northern divisional police commander Senior Superintendent of Police Eparama Waqa said a national ban would need to be imposed by the relevant authorities, adding they were only responsible for taking perpetrators to task.

SSP Waqa said the ban was in place on Taveuni and was not enforced in other areas in the Northern Division.