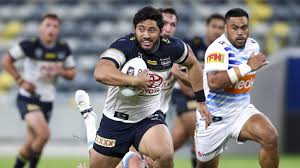 Taumalolo’s absence means Francis Molo will move into the starting side at prop, with Josh McGuire filling the No.13 jumper and teenage forward Tom Gilbert to debut off the interchange.

Coach Paul Green said Taumalolo picked up the injury when he “copped a bit of a whack” early in the 36-6 win over the Titans on Friday night.

The Tongan lock had a longer than usual rest on the bench during the match but still produced a monster second half to finish with 290 running metres.

“He actually played that second stint with it and it just showed up a little bit of bone bruising after the game,” Green said on Tuesday.

“It pulled up sore the next day so we got a scan as we normally do as a precaution … We’ll just monitor that over the next little while.

“Sometimes bone bruising … you don’t know how long they can take to actually get better, but fingers crossed it’ll only be a week [out].”

While it’s a big blow to lose Taumalolo, who had been in record-breaking form carrying the ball, Green said it provided others with opportunities.

The premiership-winning mentor is confident 19-year-old Gilbert will rise to the occasion.

“He’s a good young fella coming through. He’s been in our system for a little while now,” Green said.

“Each time he’s gone up a grade or a step up, whether it be playing Intrust Super Cup or rep footy, he’s always handled the step up really well. He’s been a real professional for a kid his age.

“He takes his footy pretty seriously and I’m just really pleased to give him his chance.”

Meanwhile, Green said star fullback Valentine Holmes isn’t treating his first meeting with the Sharks, who he left to chase an NFL dream in the US last year, differently to any other game.

“I think he’d probably like to play well against his old club but I don’t think he’s thinking too much about that,” Green said.

“I say it every week, for him it’s just about improving on his effort last week. I thought again he had some classy touches for us [against the Titans], so if he can just keep improving.

“He was pretty tidy in terms of his errors last week.”

Veteran forward Gavin Cooper has been named on the bench after missing the victory over Gold Coast with a calf complaint.

The coach also said captain Michael Morgan’s recovery from a shoulder surgery is “going well”, but the halfback is still at least a month away from returning.