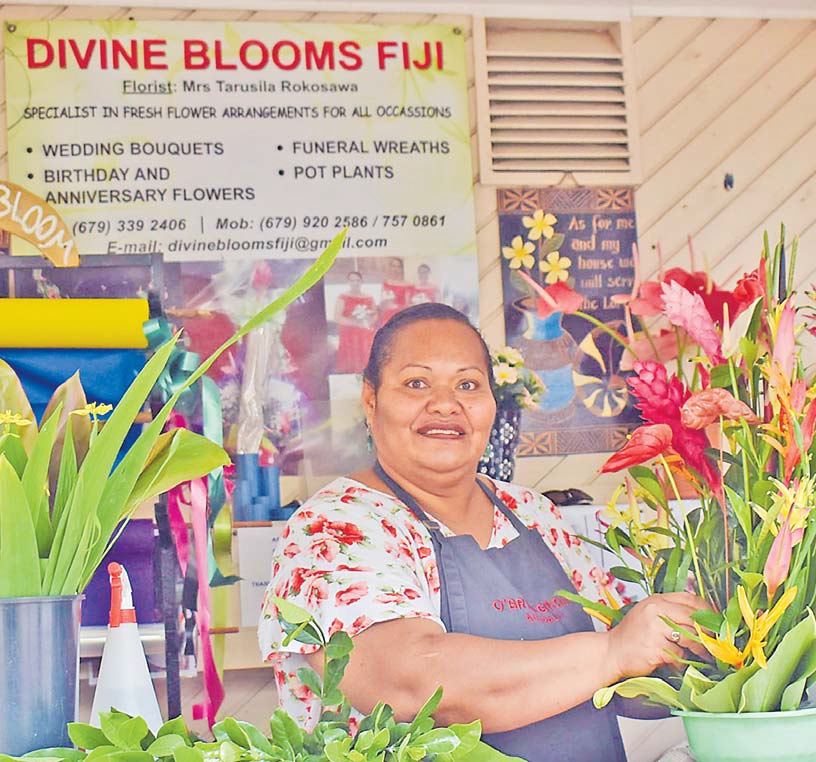 People often see the beauty of the flowers displayed in a shop but hardly the struggle behind getting them on the shelves.

Tarusila Rokosawa has been selling flowers at the renowned Victoria Arcade in Suva for the past four years and overcame challenges to maintain her business.

She is from Naibalebale, Viwa in Yasawa, but was born and bred in Nadi.

She specialises in making wedding bouquets, birthday and anniversary flower arrangements, funeral wreaths and pot plants — using fresh and artificial flowers at the request of customers.

“The prices of the flower arrangements depend on the quality and elegance of the flowers that I put. I arrange fresh flowers together and artificial flowers for functions only if some people request them,” Tarusila said.

Tarusila inherited the business from an aunty, a florist, who passed away.

Her aunty also owned a flower garden at Kubukawa Rd, Tovata, which she also gave to Tarusila.

“Before my aunt passed away she had a lot of flowers, so she didn’t want me to run out of flowers and told me I could take the business and her flower garden.

“I clearly remember her telling me ‘I don’t want you to run out of flowers when you need it’.

“Over time I’ve managed to take flower cuttings from her garden to make my own flower garden,” she said.

She operates from Monday to Friday and weekends only if there is a special order. Tarusila graduated from the Fiji Institute of Technology with a Diploma in Hotel Management.

After her husband was transferred to Suva, she could not find any work so she chose to help her aunt sell flowers.

“When we moved to Suva, I applied to most of the hotels, but didn’t get a favourable response — so I stayed home as a full-time housewife.

“My aunt came for my help one day because her flower shop was always busy. She showed me the skills of being a florist, about arranging the different kinds of flowers and taking orders.

“In 2016 I operated the shop on my own when my aunty became sick.

Tarusila said business was better now but before she took over she faced difficult times after the birth of her son.

“It took me about three years to establish the business back to its feet and get back the he old customers. It was a bit tiring for me because I just gave birth and when my son was just six months old I was managing the shop in between changing diapers and looking after my aunty.

“Just imagine a full-time mother coming to work, bringing my six-month-old baby to where I do the flowers with the baby’s food stuff, diapers and everything,” she said. She also had to prepare breakfast for her aunt who later became bedridden.

“It was a challenge, I’d come and run the business while baby-sitting my son and in the evening I’d tend to my aunty, bathe her and prepare food for her.”

Tarusila said she believed strongly in pursuing the dream to be a florist and never lost hope in her God, who always met her needs.

“Pray about it and seek God’s intervention. I believe only God can make it happen,” she said.