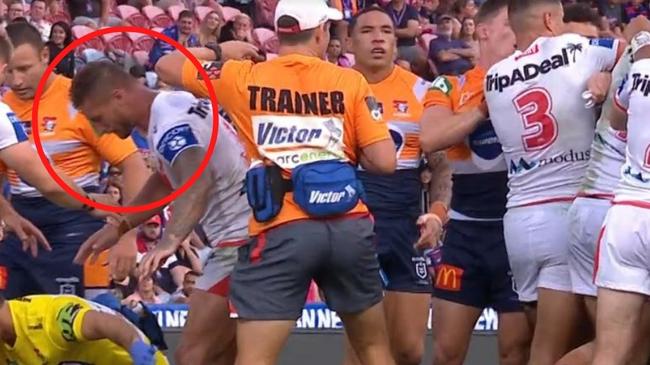 Tariq Sims was all class on Sunday afternoon. Picture: SUPPLIED

SYDNEY, 05 APRIL 2021 (7 NEWS)—Tempers flared throughout Sunday’s clash between the Knights and Dragons but a classy gesture from Fijian Tariq Sims stood out as a magic moment in the war of attrition.

The all-in-brawl attracted players from all over the field, but ensuring Mann’s safety was the only thing on Sims’ mind.

The second-rower and his teammate Matt Dufty waited with the injured Knight as trainers attended to him. Not only that, Sims stood with his back to the brawl in an effort to protect Mann and the Knights’ medical staff from the fighting.

“He’s over there shielding one of his opponents from the melee. That’s quite a moment in this sport of rugby league.”

Tariq Sims had an afternoon to remember with ball in hand as well — the 31-year-old scored the fifth double of his career and his first since 2019, bringing the Dragons back into the contest in the second half.

With a field goal the difference at half time, fans were primed for a tense second 40 at McDonald Jones Stadium.

Newcastle big man Josh King opened the scoring in the second half, crashing over in the 48th minute to put the Knights seven points ahead.

The Red V returned serve shortly after to keep the contest alive — Tariq Sims wound back the clock as he cut through the Newcastle line effortlessly.

Sims’ second four-pointer and a try from Bryaden Wiliame sealed the deal, as the Red V notched a 22-13 win.

The casualty ward was full to the brim during Sunday afternoon’s game, with Mann joining Newcastle teammates Mitchell Pearce and Tex Hoy on the sidelines.

Knights enforcer David Klemmer and Ravalawa both pulled up sore, but remained on the field.

In his post-match press conference, Newcastle coach Adam O’Brien said the game was “pretty much carnage” and confirmed the side may have to contend without Pearce for months.

The win was the Dragons’ third in a row under new coach Anthony Griffin. They’ll look to make it four on the trot when they face Parramatta.