Taliban condemned for threats to media in Afghanistan 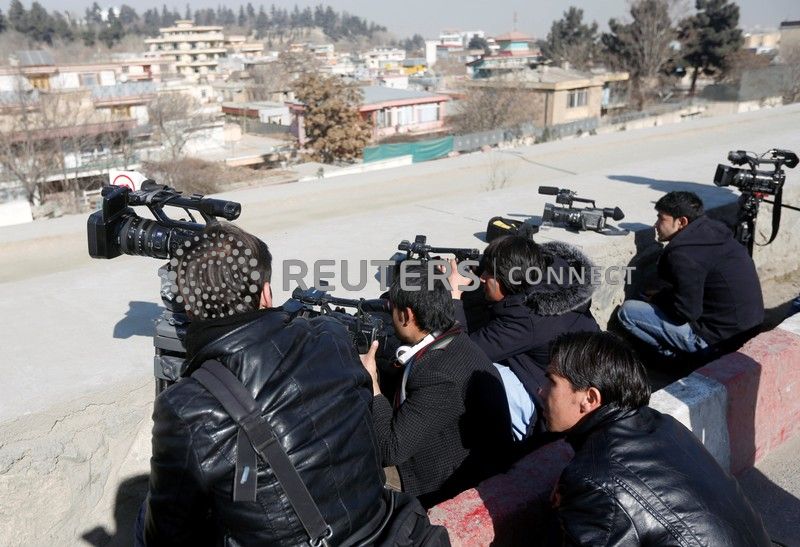 FILE PHOTO: Afghan journalists take cover as they film the site of an attack by gunmen in Kabul, Afghanistan, January 21, 2018. REUTERS/Omar Sobhani/File photo

KABUL (Reuters) – The United States and Afghanistan on Tuesday denounced a Taliban warning that Afghan media will be targeted unless they stop broadcasting what the group called “anti-Taliban statements”.

Radio stations, TV channels and other media organisations had one week to stop transmitting “anti-Taliban advertisements”, the group’s military commission said in a statement on Monday.

“Those who continue doing so will be recognised by the group as military targets who are helping the Western-backed government of Afghanistan,” it said, adding “reporters and staff members will not remain safe”.

President Ashraf Ghani’s office condemned the threats by the insurgent group, which has previously targeted reporters and employees of media organisations.

“Freedom of expression and attacks on media organizations is in contradiction to human and Islamic values,” Ghani’s office said in a statement.

The warning comes as Taliban leaders prepare for a seventh round of peace talks with U.S. officials aimed at finding a political settlement to end the 18-year-old war in Afghanistan.

The next round of talks is scheduled to begin on June 29 in Doha.

“More violence, against journalists or civilians, will not bring security and opportunity to Afghanistan, nor will it help the Taliban reach their political objectives,” Bass said on Twitter.

Afghanistan was the deadliest country in the world to be a journalist in 2018, with 13 deaths according to the Committee to Protect Journalists (CPJ). The International Federation of Journalists said 16 journalists were killed last year.

With the international media presence in Afghanistan sharply reduced since the withdrawal of international troops in 2014, domestic media outlets have filled the gap but their work has become increasingly difficult.

The Taliban said it killed the employees because Tolo was producing propaganda that supported the occupation of Afghanistan by the United States and its allies in their war against the insurgents.