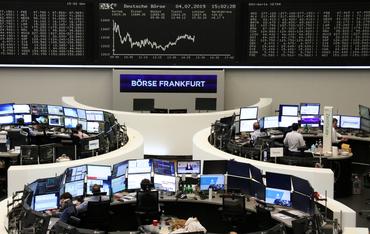 How low can you go? The coming week may tell whether the incessant plunge in global bond yields shows any signs of relenting.

Mind-boggling milestones are being hit almost daily as central bankers beat the global rate-cut drum, and on the news that Christine Lagarde will be the next European Central Bank chief and two super-doves are being lined up to join the U.S. Federal Reserve.

German 10-year bond yields fell below the ECB’s -0.40% deposit rate for the first time, the whole U.S. curve yields less than the Fed’s 2.5% target rate and Britain’s 10-year gilt yield is below its central bank rate too.

The list goes on… Belgium’s 10-year yield is sub-zero for the first time, the entire Danish bond curve yields less than zero, Switzerland’s is tantalizingly close to doing the same so it’s no surprise then that the pool of negative-yielding bonds globally is now more than $13 trillion and getting deeper.

Signs of unease are starting to show though — some asset managers are starting to back away from bonds, wary the “euphoria” over U.S. interest rate cuts is overdone and a Fed policymaker this week made a point of saying that markets do sometimes get things wrong.

But with so much priced in now, any failure to deliver on easing could spark a tantrum. A big one.