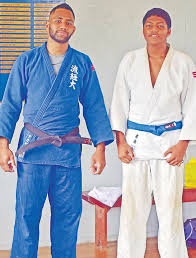 THE level of competition gets tougher as Tevita Takayawa continues his fight to secure a spot in the 2020 Olympics in Japan.

“This year is the first time for the Asian Championship to be organised instead of our yearly Oceania Championship which is always dominated by Australia and New Zealand,” Takayawa said.

“This competition is merged with the Oceania Championship that has world champions from Asia like Japan, South Korea, China and many more.”

The 23-year-old Tovu Totoya Lau lad said heading into this competition was nerve-racking but he was determined that being the 100kg Oceania champion would challenge him as he represents Fiji.

“I also represent Oceania and the smaller islands,” Takayawa said.

“Heading to the competition arena I noticed that the arena had all the flags of the Asia teams but none of the Oceania teams and it sparked a fire in me to make some noise in the upcoming fights.

“A week before leaving for competition, I had badly injured my knee and my head coach Iwasaki Sensei had told me that he was going to pull me out of the competition but I asked him to give me three days and if it was still bad I would pull out.

“I visited the physio three times a day and iced it every single day.”