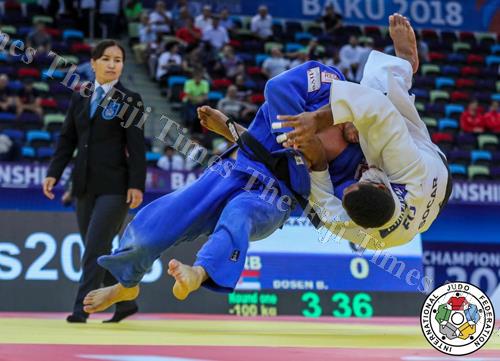 FOR Fijian judoka Tevita Takayawa, the slight extension has given him more motivation in his hunt for a spot in the Fiji team to the Olympic Games next year.

While currently still studying in Ryutsu Keizai University in Rygasaki City in Ibaraki Prefecture in Japan, Takayawa has focused on intensifying his training.

“When the International Olympic Committee announced the Olympic Games new dates, I had mixed feelings about it but now I’ve realised that I’ve been given more time to prepare and it has motivated me to train harder,”Takayawa told this newspaper from Japan.

“My university is still carrying out training but we have cancelled all the scheduled training camps we were supposed to have with other universities because of this outbreak.”

The Lau islander said despite not accurately sure where he stood performance wise, his mentality in training had not
changed.

“It is a step back in preparation for the Games but the intensity in my training is still there.”

Although Japan had recorded 2617 confirmed COVID-19 cases and 65 deaths, Rygasaki City where Takayawa resides had yet to record a case.

“I am aware of the virus and I’m taking the necessary precautions to make sure I don’t get it.

I’m fortunate that the city I live in hasn’t had a confirmed case and the virus hasn’t spread close to where I live but travelling out of the city has been restricted,” he said.

“My only advice to people is to follow instructions given by the Ministry of Health and the Fijian Government because they’re working really hard to stop this virus from spreading. “