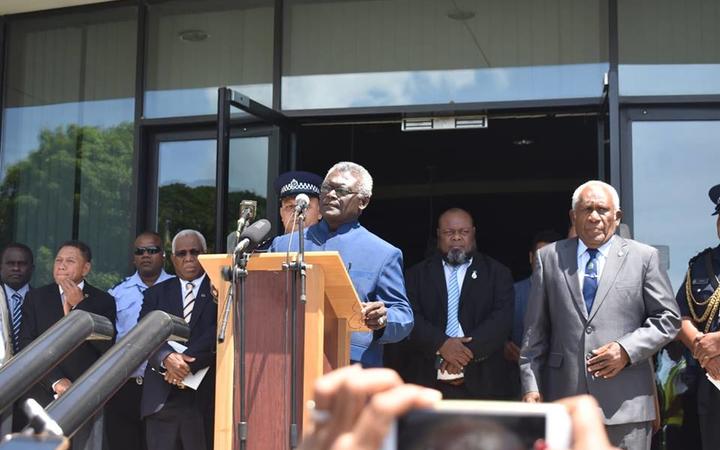 Following an inconclusive April 3 election in which no single party won a majority, Sogavare won the backing of 34 of the country’s 50 members of parliament in a controversial run-off Wednesday, with his opponents boycotting the vote.

Asked to comment on the election result and what it means for bilateral relations, MOFA spokesman Andrew Lee said that Taiwan’s government is happy to see Sogavare’s victory and is optimistic about the future of relations between the two countries.

“We look forward to working with the new administration and all parliamentarians from different political parties in the country to further strengthen the already solid ties,” he added.

Commenting on riots following Wednesday’s election, Lee said no Taiwanese were injured during the protest, which has since subsided.

Sogavare’s election sparked violent protests in the capital Honiara Wednesday, with riot police deployed in a bid to maintain order, according to foreign media reports.

This will be Sogavare’s fourth term as prime minister, his previous stints being in 2000, 2006 and most recently in 2014.

Taiwan has been closely monitoring the political situation in the Pacific ally, as some believe the election could determine the future of ties between the two countries.

Several media reports recently cited a number of senior Solomon Islands politicians, including caretaker Prime Minister Rick Hou, as saying they will review their country’s diplomatic relations with Taiwan if elected, raising the potential of a diplomatic switch from Taipei to Beijing. Hou is part of the Sogavare coalition.

Deputy Foreign Minister Hsu Szu-chien tried March 21 to ease the speculation by saying that he and Hou reaffirmed the friendly bilateral relations during a meeting last month.

To further solidify ties, MOFA previously said the two countries recently signed a memorandum of understanding in which Taiwan will offer “strategic loans,” reported by media sources as NT$900 million (US$29 million), to help the Pacific country build a national stadium that will be used for the 2023 Pacific Games

MOFA spokesman Andrew Lee said some people were unhappy with the victory of veteran Solomon Islands politician Manasseh Sogavare in Wednesday’s election and rioted in parts of Honiara, damaging commercial property near Pacific Casino Hotel and in the suburb of Lungga.

Rioting has so far not spread beyond the capital and members of Taiwan’s embassy and their families are all reportedly safe, Lee said.

MOFA urged Taiwanese in the city to take precautions to ensure their safety and keep in touch with the embassy.

A code “yellow” is the third level in MOFA’s 4-tier travel warning system, which consists of red, orange, yellow and gray, where “red” represents the most serious situation.

Yellow means Taiwanese travelers should review their travel plans and be extra vigilant when visiting.