Tagituimua heads for the big league 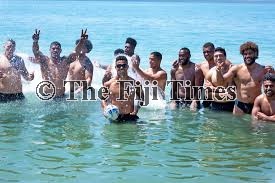 FIJI Bati young star Penioni Tagituimua has proven himself as one local rugger, who has the full package of becoming a future star in international rugby league.

However, the 21-year-old believes his fitness hasn’t reached his expectations as he trains with the Kaiviti Silktails team in Suva.

The Kadavu lad was part of the Fiji Bati team to the World Nines rugby league tournament and was one of the few locals selected to be part of the squad.

Tagituimua said there’s always something new to learn and he was eager to listen and learn to be a better player in the future.

“Training has been going on well for me and the boys and I’m looking forward to our first game,” he said.

“One of the greatest challenges I face is to try and complete fitness at the right time. It has been really tough and I am young and I will try to gain much knowledge of the game.”

As a local-based player making his name in the international arena, Tagituimua has one advice for young players.

“Keep working on your dreams and what you want to become when you grow older. Believe that God is always listening and if you think He isn’t listening to your prayers, He is. So keep working hard because He will always provide.”

The Kaiviti Silktails team is a semi-professional rugby league football club that was formed last year .

It will compete in the first season of the third tier 2020 Ron Massey Cup and to transition into the second tier NSW Cup in 2021.