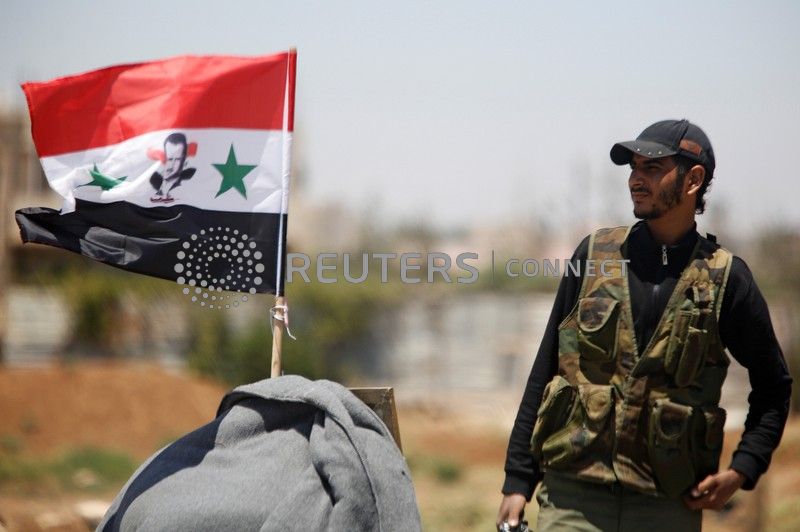 FILE PHOTO: A Syrian army soldier stands next to a Syrian flag in Umm al-Mayazen, in the countryside of Deraa, Syria, July 10, 2018. REUTERS/Omar Sanadiki/File Photo

GENEVA (Reuters) – At least 380 civilians have been arrested in Syria’s south and 11 civilians serving on local councils and former fighters have been killed or attacked there since the government retook the area, the United Nations said on Tuesday.

The U.N. human rights office said the incidents took place in the province of Deraa, where peaceful protests against 40 years of autocratic Assad family rule began in 2011 and were met by deadly force before spreading across the country.

The report by the U.N. rights office said that the 11 cases included fatal drive-by shootings and attempted murders, but it was not in a position to identify any perpetrators as it has no presence in Syria, which has been gripped by war since 2011.

The report said that the incidents, which it described as “most likely reprisals committed by parties to the conflict”, had taken place despite attempts at reconciliation between former combatants.

Syrian authorities could not immediately be reached for comment.

The Syrian army, aided by Russian airpower and Iranian militias, retook control of Deraa city from rebel forces in July on its way to regaining control of the bulk of Syrian territory.

But residents of the city say disaffection has been growing as President Bashar Assad’s secret police once more tighten their control and a campaign of arrests has sowed widespread fear.

The rights office had received reports that from July 26, 2018 to March 13, 2019, former members of armed groups and civilians who joined government bodies in the province including civilian local councils were victims of what appear to have been “targeted killings,” spokeswoman Marta Hurtado told a news briefing.

At least 380 people were arrested or detained in the period, including three who had recently returned after fleeing the war, she said. The reasons were unclear, and little or no information is given to the families, Hurtado said, adding that some arrests were said to be linked to suspicion of “terrorism”.

About 150 were released after a few days, but at least 230 have disappeared into custody, she said.

“In some cases we know that they have been detained to extract information, either what happened in the past or how the opposition is currently acting, but in general the bottom line is that they don’t inform why these detentions are taking place,” Hurtado said.

“Active combat has ended in much of Syria, but nothing has changed in the way intelligence branches trample rights of perceived opponents of Assad’s rule,” Lama Fakih, acting Middle East director at Human Rights Watch, said in a statement.

“Lack of due process, arbitrary arrests, and harassment, even in so-called reconciled areas, speak louder than empty government promises of return, reform, and reconciliation.”