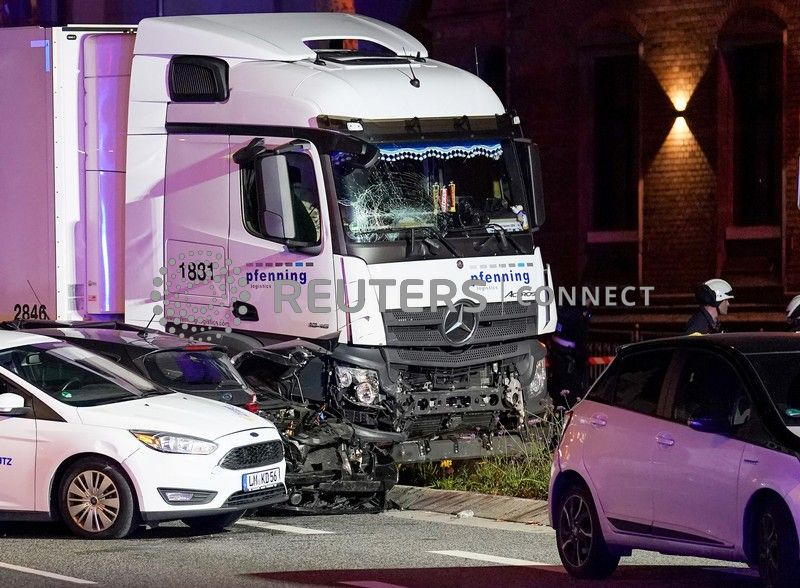 A truck stands beside damaged cars in Limburg, Germany, October 7, 2019, after several people were injured when a stolen truck drove into vehicles during rush hour. Picture taken October 7, 2019. REUTERS/Stringer

BERLIN (Reuters) – A Syrian man has been arrested on suspicion of hijacking a truck and ramming it into traffic in western Germany on Monday night, injuring eight people, prosecutors said.

German media cited security officials as saying the incident in the city of Limburg was being treated as an act of terrorism.

Prosecutor Ralf Badle declined to comment on the motive on Tuesday. He said it was being treated as an attempted murder.

The truck rammed into eight other vehicles in the city north of the financial hub of Frankfurt, Badle said.

The 32-year-old suspect was due to appear before a judge who will decided whether to issue a formal arrest warrant.

Police searched two addresses linked to the suspect where they seized mobile phones and USB sticks, Badle said. “We can’t give specific details about the motive,” he added. “All possibilities are being investigated.”

The incident occurred almost three years after a failed Tunisian asylum seeker killed 12 people by ramming a truck into a Berlin Christmas market.