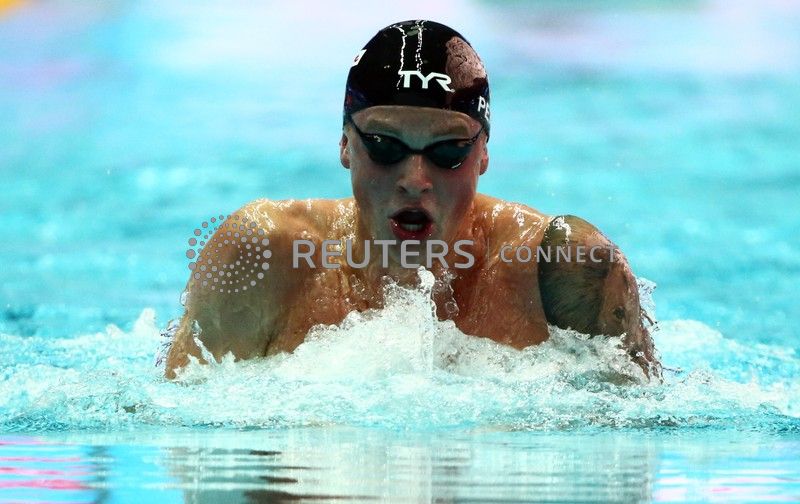 GWANGJU, South Korea (Reuters) – Sun Yang eased through to the 400 freestyle final at the world swimming championships on Sunday as doping questions continue to dog the triple Olympic champion, while Adam Peaty flirted with his own world record on the way to the 100 breaststroke semis.

American freestyle queen Katie Ledecky began her quest for a sweep of the 200, 400, 800 and 1,500 titles by clocking 4:01.84 in the 400 heats with Australian Ariarne Titmus proving she will be a threat in the final, finishing second quickest 0.58 behind.

With the Court of Arbitration for Sport (CAS) considering a case against him, Sun’s presence at these championships has been the source of much controversy but the 27-year-old did not seem fazed by the debate as he clocked 3:44.10 to qualify fastest.

Sun, who won Olympic gold for China in the 400 in London, was cleared by a FINA doping panel of breaching the governing body’s rules earlier this year but the World Anti-Doping Agency is seeking to overturn the decision at CAS.

The nine-times world champion, roared on by an army of boisterous Chinese fans on Sunday, said: “I just wanted a time that would give me some confidence. I wanted to reach the final and then do what I have to do.”

Australia’s Mack Horton, who pipped Sun to gold in the 400 at the Rio Games and labelled him a “drug cheat” ahead of that final, has been off the pace in 2019 but put in his quickest time of the year to qualify fifth fastest, 1.41 seconds behind.

Horton was tightlipped about Sun’s participation at the championships: “I’m just trying to focus on myself and that’s all I can control at the moment.”

Peaty set pulses racing in his heat by posting the fifth fastest 100 breaststroke of all time (57.59) and it will take something special to end his unbeaten five-year run in the major championships.

The world record holder at 57.10, Peaty has made it his mission to get below the ‘magic 57’ mark.

Peaty has previously been an outspoken critic of Sun but is keeping his opinions to himself. For the moment.

“I’ll give you my verdict towards the end of the week,” he said. “I am here to race, I am not here to push up politics or get my voice out there like I normally do.”

Ledecky has swam the 12 fastest times ever recorded in the 400 freestyle and while the American will be favourite to add to her haul of 14 world titles in the final later on Sunday she will have to be wary of Australian upstart Titmus.

“It is going to be a great race tonight. It’s going to be lot of fun. Hopefully we’ll both put up some really great times,” said Ledecky, adding that her chances of winning her four individual events would boil down to staying fresh.

“It’s just about managing prelim swims and things like that so that is right where I wanted to be, so feeling good about my plan moving forward.”

In other heats, Swede Sarah Sjostrom moved a step closer to becoming the first female to win the same event five times after she cruised into the 100 butterfly semis in a time of 56.45.

“Not many swimmers have been on the top level (in one event) for such a long time so I’m very happy with where I am at the moment, so I will just continue to try to improve all the time,” she said.

Katinka Hosszu began her campaign for a fourth straight sweep of the individual medley world titles by qualifying fastest by more than two seconds in the 200.