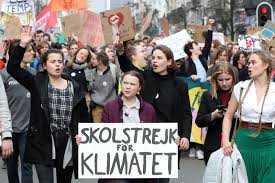 BRUSSELS (Reuters) – The European Union should spend hundreds of billions of euros combating climate change during the next decade, its chief executive said on Thursday, responding to a Swedish teen who has inspired a global movement of children against global warming. In a speech alongside 16-year-old Greta Thunberg in Brussels, European Commission President Jean-Claude […]