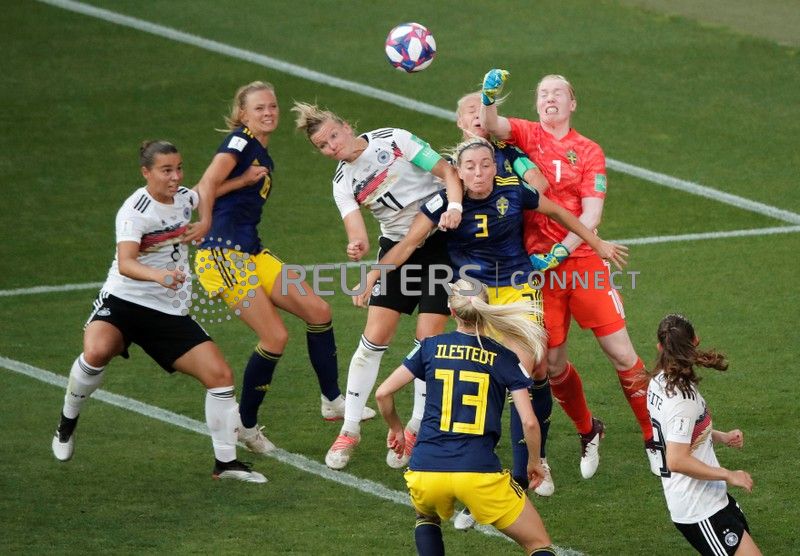 RENNES, France (Reuters) – Sweden ended Germany’s hopes of a third women’s World Cup win, coming from behind for a surprise 2-1 quarter-final victory on Saturday thanks to goals from Sofia Jakobsson and Stina Blackstenius.

The Swedes now face a last-four clash with the Netherlands in Lyon on Wednesday after a win which means Olympic champions Germany will not have a chance to defend their title in Tokyo next year.

It was sweet revenge for the Swedes, who had lost the Olympic final to the Germans 2-1 in Rio de Janeiro in 2016 but who have now booked a place at their old rivals’ expense in the 2020 Games.

Many will still look to the other semi-final, Tuesday’s clash between England and the United States, for the likely winner of the tournament but the Swedes showed they should not be under-estimated with their swift counter-attacking style.

Germany began brightly and took the lead in the 16th minute through Lina Magull, who twisted her body perfectly to beat Hedvig Lindahl with a hooked volley.

Germany had not conceded a single goal in the tournament but their defence surprisingly failed to deal with a long ball down the middle from Linda Sembrant which Jakobsson latched onto and slotted home past goalkeeper Almuth Schult.

At the break, Germany coach Martina Voss-Tecklenburg threw on midfielder Dzsenifer Marozsan, who had not played since breaking a toe in their tournament opener against China, looking to add some much-needed creativity.

Instead, just three minutes after the resumption, it was the Swedes who struck again.

Schult did well to turn away a powerful header by Fridolina Rolfo but the rebound fell kindly to striker Blackstenius, who fired home from point blank range for her second goal in as many matches.

Substitute Lena Oberdorf missed a great chance to force the game into extra time when she headed wide with the goal gaping in the 80th minute but Sweden held their nerve to reach their fourth World Cup semi-finals.

“We looked at Germany and knew there would be a bit more space behind their backline to exploit with Blackstenius and Jakobsson. It worked well, sprinting past the defensive line,” said Sweden coach Peter Gerhardsson.

“We’ve talked about the possibilities here to go far and win every game. A good sign is that we’re now qualified for the Olympics, which was hanging over our heads for a while. Now we don’t have to worry about it. There’s not a single cell in us that’s content with this. We’re going to go for it.”

There were tears on the faces of many of the Germany squad as the reality of their exit — and Olympic absence – hit home hard.

“We wanted to do so much more. This should not happen like it did,” said Magull.

“We had one, two good chances to equalise but did not manage it. That’s a real shame. We knew they had fast players and wanted to defend high up the pitch,” she said.

“That brings the danger of conceding on the counter, which had happened before the break.”

The win was Sweden’s first over Germany at a major tournament since 1995, having previously come close in the 2003 World Cup final and in the 2016 Rio final.

Netherlands, Sweden, along with Britain — after England reached the last four on Thursday — have qualified for the 2020 Olympics as the top three European teams at the World Cup.